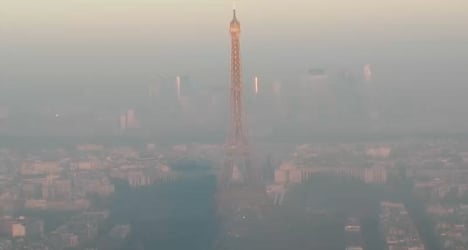 The Eiffel Tower and Paris, obscured by dangerously high levels of fine particles, which are "endangering people's lives". Photo: VideoSurf/Screengrab

While the return of the dry weather in recent days has been welcomed by Parisians, it has also brought with it a more unwelcome side effect – a rise in pollution levels.

While most Parisians will only be concerned with soaking up the sun, environmental groups have other priorities.

They want authorities to tackle the pollution danger caused by high levels of nitrogen dioxide in the air, which pose a risk to anyone who suffers from asthma and breathing difficulties.

According to the Airparif, the national air quality

and pollution agency, levels of particles are so high that even a brief exposure poses a risk to the health of certain vulnerable members of the population.

Such particles are too tiny to be filtered in the mouth and nostrils, and so embed themselves in the lungs more easily

, and can have significant negative health effects.

Pollution levels tend to rise in winter because of the increase in fuel, notably wood.

In December The Local reported how pollution levels had reached their highest levels in six years. To illustrate the dire quality of air in Paris this week, meteorological website Météo Consult published this short time-lapse video of the Eiffel Tower, obscured by clouds of particles throughout the day.

Airparif says levels, which peaked on Friday, will continue to remain high throughout the early part of this week.

On Friday, speed limits were reduced on roads around Paris in order to try and cut the levels and on Sunday police in the capital advised vulnerable people to avoid strenuous activities.