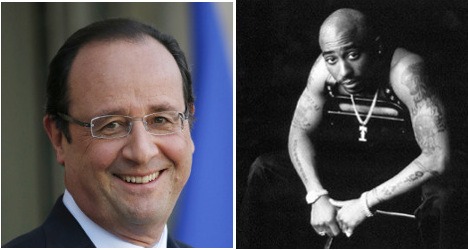 When word went out last week that Pierre-Yves Bocquet had been tapped to be Hollande’s new speech writer no one got too excited.

After all, Bocquet’s CV is typically impressive for a top government job. Like his boss, he’s a graduate of France’s elite École Nationale d'Administration. And he’s been working in government since the 1990s.

But on Monday French daily Le Monde broke the news that the otherwise anonymous bureaucrat, who was already working in the administration, had for years worked as a music journalist specializing in American gangsta rap under the pen name Pierre Evil.

He even wrote a 2005 book entitled 'Gangsta Rap', which carries the following inscription:

“This book is the story of a fascination. The fascination which has gradually entered the world from the late 1980s and saw a handful of post-adolescents from the worst ghettos of America – Dr. Dre, Ice Cube , Snoop Dogg, 2Pac Shakur … – transformed into music superstars.”

When contacted by Le Monde Bocquet declined to discuss the work of his alter ego, saying he has a "duty of confidentiality". He added his work prevents him from "personal and political expression on behalf of the president."

With few exceptions, his colleagues knew nothing of his double life. His old editor at the monthly cultural magazine Chronic’art never saw anything that grabbed his attention.

"I remember a quiet man, very neat,” magazine founder Cyril de Graeve told Le Monde. “He looked old school, tiny glasses and a suit, or just the opposite of articles he wrote in our pages. I do not know his real name, he worked for us sporadically as a volunteer."

However, his colleagues said his work was top notch, better than the mass media music press.

“Unlike the hipsters at Libération or Les Inrockuptibles, Evil knows what he’s talking about and takes the time to understand the words,” said journalist and musician Fred Hanak. “He never makes mistakes.”

Hollande has a slightly less clean record when it comes to hip hop-related matters. During his 2012 run for president Hollande's campaign made a video to the soundtrack of the rap song 'Niggas in Paris' that shows him visiting the heavily minority areas in Paris's suburbs.