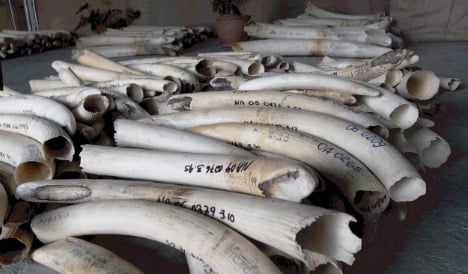 All of the lots were acquired before 1976 — the only type of ivory that can be legally sold since a global ban on the trade in 1989.

The top lot — two tusks weighing 120 kilogrammes from an elephant that was "shot in 1966 by an Italian fighter in Kenya" — went to a wealthy Qatari for €125,000, the auction house said.

An Armenian collector paid almost 69,000 euros for another lot, which included two tusks around 230 centimetres (90 inches) long from an elephant killed in the Central African Republic in the 1960s.

Many of the lots were sold by people who have spent their lives in Africa but who, after retiring to the French Riviera, need to supplement their pension, said Debussy.

"Often they are very attached to the tusks, which are souvenirs of their life there," said the agent, who specialises in this type of sale.

Last month France crushed three tonnes of illegal ivory worth an estimated one million euros in a ceremony at the foot of the Eiffel Tower, the first major crushing ceremony in Europe since the global ban.

Elephants are being massacred to produce ivory that is in high demand in the rapidly-growing economies of Asia, particularly China and Thailand.

Chinese buyers are very keen on ivory goods because "in China, it is a sign of wealth" said Debussy, adding that "brokers from all over Europe attended the sale".

One Chinese buyer set another record, paying €62,500 for a pair of tusks from the Central African Republic.