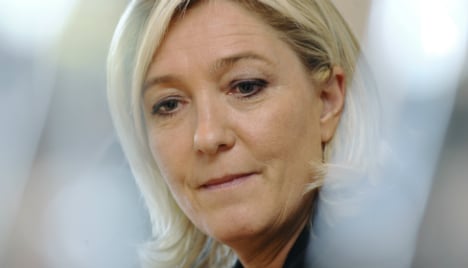 Party leader Marine Le Pen said she was "very satisfied" that her party had amassed enough candidates to run in 546 towns in the March 23th elections, although her party is accused of having cut corners to do so.

Under French local election rules, rival camps field lists of candidates, with town council seats split according to the vote result. Each council then votes to elect a mayor.

The FN will be fielding lists in one in five towns of more than 3,500 inhabitants, an all-time record.

The polls will be the first electoral test for President Francois Hollande since taking office two years ago, and with his approval rating at extreme lows, his ruling Socialist party is expected to take a drubbing.

But the centre-right UMP party of ex-president Nicolas Sarkozy, divided and hit by a succession of scandals, is in a poor position to take advantage of the Socialist's plight, leaving an opportunity for Le Pen's FN.

The FN struggles to attract candidates to fill local election lists due to the stigma attached to a party whose historic leader, Marine's father Jean-Marie Le Pen, has repeatedly been convicted of racial hatred and Holocaust denial.

In the central town of Nevers, the list leader was forced to disown one of her supporters who was shown posing with a Nazi flag on Facebook.

In at least three other towns, allegations emerged Friday that the FN had signed on candidates without their permission, including in one instance, a couple in their nineties.

The FN counters that potential candidates are put under extreme pressure not to run for office.

In Brittany, FN candidate Alain Rousseau slammed the "onslaught" against FN candidates that "harks back to hateful times when some of our dear compatriots were pinned with yellow stars."

According to FN campaign director Nicolas Bay, the party has a real chance of taking the mayor's office in about a dozen towns.

But the main goal, he said, is to win seats in as many town councils as possible.