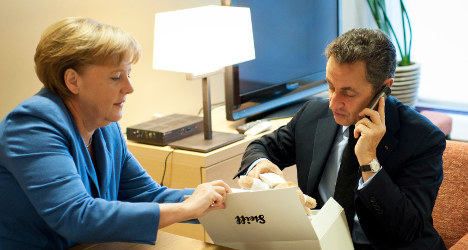 French daily Le Monde revealed on Friday a potentially far reaching public corruption scandal in France, at the centre of which is the ex-President Nicolas Sarkozy and a prosecutor at France's Supreme Court. The revelations was the latest dramatic development in the labyrinthine web of corruption cases threatening to ensnare the former French president and destroy his chances of a political comeback.

"This has all the elements of a state scandal," Le Monde writes.

Nicolas Sarkozy is suspected of attempting to pervert the course of justice on the basis of phone taps ordered by judges investigating his links with Muammar Gadaffi, it emerged on Friday.

The paper claims the high ranking prosecutor, a veteran of the political right wing, secretly passed Sarkozy legal updates about a separate corruption scandal, the Bettencourt Affair. In return for his help the prosecutor, Gilbert Azibert, allegedly benefitted from Sarkozy's influence in a winning a posh government job in Monaco.

"I will show in due course that this is a political issue," said Herzog, who added his client is still subject to the wiretap

The twisting route of this latest scandal for Sarkozy can be traced back to an investigation launched last year by French judges over allegations his 2007 presidential campaign was bankrolled in part by Gadaffi.

The judge ordered wire taps in April 2013 on the former head of state as well as two of his former ministers Claude Gueant and Brice Hortefeux. However, it seems someone involved in the investigation tipped Sarkozy off and he became extremely careful about what he said in his 'official' phone.

When investigators found out about this secret phone they ordered it to be tapped as well, and then learned that Sarkozy’s lawyer was getting secret updates on the Bettencourt Affair from Gilbert Azibert, a prosecutor at France’s top appeals court – the Cour de Cassation.

Le Monde says judges at the Cour de Cassation are set to rule on March 11th whether seizures of Sarkozy’s agenda and other documents in the course of their probe into the Bettencourt Affair were legal.

If the court rules the documents seized from Sarkozy, however, they could lead to other investigations being opened on the former head of state.

Charges that Sarkozy had taken advantage of the L'Oreal heiress when she was too frail to know what she was doing were dropped in October 2013.

But ten other people, including his former campaign treasurer Eric Woerth, have been sent for trial over the allegations that UMP officials were handed envelopes stuffed with cash from the Bettencourt coffers.

The ruling on the handling of the Bettencourt case is crucial because it has the potential to wreck investigators' attempts to build a case over the payout Tapie received from the state in connection with the collapse of the Credit Lyonnais bank.

Sarkozy is suspected of having rigged a dispute-settlement procedure to ensure Tapie got the cash as a thank-you for the tycoon, previously a Socialist minister, supporting him in the 2007 election.

According to Le Monde, the diaries are crucial to the case against Sarkozy because they show how close he was to Tapie, who has several corruption convictions, including one for match-fixing when he was the boss of Olympique Marseille football club.

If the diaries are ruled to have been seized illegally in the Bettencourt case they will also become inadmissible as evidence in the Tapie affair.

The latest Sarkozy developments came two days after an unrelated scandal erupted with the revelation that private conversations and meetings he had while president had been secretly recorded by a close aide.

The former president's request for an emergency injunction against further publication of the content of the tapes will be heard by a court on Monday.

The extracts published so far have included some mildly embarrassing material — aides referring to Sarkozy as "the dwarf" for example – but nothing explosive.

Sarkozy has been embroiled in various scandals since he left office in 2012. This latest affair if proven, may put an end to his hopes of making a comeback in 2017.