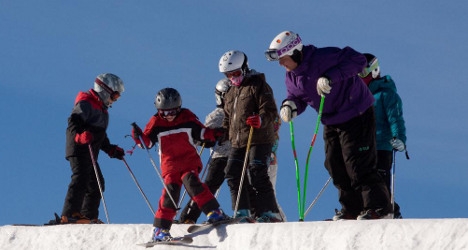 The damage could continue to unfurl in coming days as the 16-year-old boy who struck the child at La Joue-du-Loup resort in the French Alps was being questioned in police custody.

It’s unclear whether the teen may face criminal charges, but local police Chief Pierre Bénard told France Info radio the 16-year-old was going “very fast” and the crash was “violent.” On Friday AFP reported the teen was no longer in police custody.

The young man from the northern French city of Amiens, apparently “hit a jump, but must not have seen there was a child,” Bénard told France Info. “We must now determine whether he didn’t see the young victim or if he was not able to control its speed."

All of the circumstances of the 12 pm crash, including whether drugs and alcohol were a factor, are under investigation and will go toward a final decision on whether the case involved criminal wrongdoing.

Later in the day a 23-year-old woman on a snow board fell 100 metres to her death in an off piste section of a glacier at the Alps resort of La Plagne called ‘Le Cul du Nant.’ A companion skiing with her went to get help, but rescuers couldn’t save the woman, French paper Le Dauphiné reported.

On Thursday morning a 51-year-old man from the south-eastern French town of Thorens-Glières died after tumbling down a slope on Bellecôte Mountain, which is in the Alps.

The man appears to have fallen after skiing over some ice, which prompted an avalanche. He then tumbled 400 metres down a steep slope, hitting rocks along the way. His son was skiing with him at time of fatal fall.