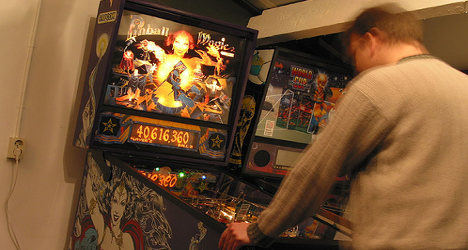 France is mulling cutting 120 of its most absurd taxes, including one on the number of balls in a pinball machine. Photos: Robin Van Mourik/Flickr

The same France that is regularly chided for its love of taxes, including its landmark  75 percent tax rate on the country’s fattest salaries, has been advised  to ditch a raft of taxes that are just not worth their weight in gold.

The move was revealed by Le Figaro newspaper under the headline: "The 192 absurd taxes that need to be scrapped" and was based on a report by the Ministry of Finance’s Inspection Générale des Finances (IGF).

In the inspectors sights are the 192 "small taxes" that businesses pay, but which bring in less than €150 million each per year adding up to around €5.3 billion.

Among them are some fine examples, like a tax on the number of balls in a pinball machine or a charge on cross country skiing. The authors report recommends scrapping between 90 and 120 of them.

“Even though these taxes are small, that is they represent small sums, there are a lot of them, so it’s an added complexity for businesses to deal with,” a representative of the Ministry of Finance told The Local. “So the question is, what can we do to simplify all this?”

Finance Minister Bernard Cazeneuve, who askd for the report, is in favour of doing away with some of the taxes in an effort to spur business growth and make a dent in France’s record high unemployment.

"There are around 150 that have a very low yield, in fact some cost more than they bring in," Cazeneuve said in January.

Also, any reduction in the number of constant nibbles the French taxman takes from its companies' bank accounts, would also help bring the country in line with its neighbours, French daily Le Figaro reported.

For example, Germany has only three taxes that each bring in less €100 million per year and the United Kingdom has none, versus 179 in France. This discrepancy should not come as a surprise given the creativity of French government officials when it comes to taxes.

Between 1998-2012, they put into place no fewer than 93 new taxes, with 2010 seeing the arrival of 19 brand new levies. Though it’s worth noting the French people do launch the occasional tax revolt, as was prompted by the so-called ‘ecotax’ on heavy good carrying lorries.

After often violent confrontations between police and protesters from the ‘Bonnet Rouge’ movement in Northern France, the government backed down on the new charge and put it on the backburner for a couple of years.

But there are plenty of others that have succeeded, like the so-called ‘small tax’ on table football that charges € 5 per year, per ball in the machine, and can cost more to enforce than they bring in for the government.

However, scrapping 120 taxes would mean cutting off a €3 billion source of income, which opens the possibility of budget cuts and virulent public outrage.

While the ministry said it is weighing up cuts as part of a broader effort to bring France’s fiscal house into order, no options were made public on how to fill the gap left by the possibility of less revenue.

A proposal from the ministry is expected by April on which taxes could end up in the waste bin.