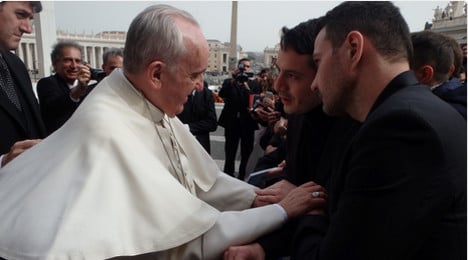 Rogue trader Jerôme Kerviel seen here on the right meeting the Pope in the Vatican. He is currently walking back to Paris. Photo: Twitter

Jerôme Kerviel, a French rogue trader who cost Société Générale bank nearly €5 billion in high-risk transactions, is said to be walking the 1,400 kilometres (870 miles) between Rome and Paris as a protest trek against "the tyranny of the markets".

He is due to arrive in the French capital on March 19th, when an appeals court is to rule on his challenge to a 2010 conviction and yet-to-be-applied prison sentence for breach of trust, forgery and entering false data.

A source close to the ex-trader told AFP that Kerviel's trek was "a march against the tyranny of the markets, to use the same words as the Holy Father".

Kerviel began the walk after meeting Pope Francis in the Vatican during the pontiff's weekly general audience on February 19th.

"Something happened inside me and gave me the strength to start the walk, to get my life in order," he was quoted as telling Italy's Corriere della Sera newspaper.

"My feet, my legs hurt, I have pain everywhere because I'm not used to walking so much and I haven't done any exercise in ten years," he said. But "I feel right in my head, I feel free."

Another daily, 20 Minutes, said Kerviel this week had reached Tuscany and was covering 15 to 30 kilometres per day.

His backpack carried some clothes, ointment, bandages for blisters, an iPad, a GPS-equipped mobile telephone and water.

Kerviel, who maintained during his trial that Société Générale was aware of his costly trades, was also sentenced to refund to the bank the billions he was convicted of losing, with interest.

If he loses the appeal this month he risks beginning his prison term soon afterwards.