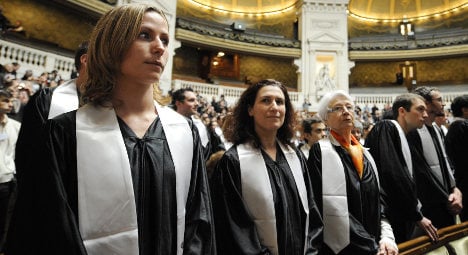 Foreign students may love French universities but academics do not think so highly of them, it seems. Photo: Bertrand Guay/AFP

Foreign students flock to French universities every year but it appears its universities do not have such a great reputation around the globe among academics.

The publication of the Times Higher Education 2014 World Reputation Rankings for universities revealed that France only had two in the top 100 after two others, one of which was the École Polytechnique, dropped off the rankings.

Worryingly neither of the French institutions in the top 100 were inside the first 50 places.

One of the ranking's experts from the Times Higher Education Magazine told The Local on Wednesday the league table should spark serious concern among higher education chiefs in the country.

"It's worrying. For a country with a great reputation in so many sectors this should sound alarm bells," said Chris Parr from Times Higher Education.

The two French institutions to fall out of the top 100 were Université Paris-Sud and the prestigious École Polytechnique, leaving the country with just two representatives.

Its highest-placed institution, Université Paris-Sorbonne, holds its position in the 71-80 band, while Université Pierre et Marie Curie slips into the 91-100 group.

Phil Baty editor of the Times Higher Education Rankings suggests the recent highly publicized reforms to France's Higher Education system, including the controversial plan to allow more courses in English, may have harmed universities' reputations in the short term.

“It would be reasonable to speculate that the complexity of the French research system and the continuing reforms to its academy are confusing the global academic community. When strong university brand names are ever more important in attracting top talent, collaborations and investment, this is a concern. Limited international visibility and prestige have real-world impacts,” said Baty.

The reputation rankings are based on a global invitation-only opinion poll carried out by Ipsos MediaCT for Times Higher Education’s rankings data supplier, Thomson Reuters.

The 2014 results are based on 10,536 responses from senior published academics.

France's fortunes contrasted dramatically with those of Germany.

In representative terms, the US and the UK are followed by Germany, which gains a top 100 entrant, RWTH Aachen University (joining the 91-100 group), giving it six institutions in the rankings.

Although its number one institution, Ludwig-Maximilians-Universität München, slips from 44th to joint 46th, all other German institutions hold steady or rise.

It has also been a bad year for Sweden, reputation-wise: it now has just one top 100 institution, the Karolinska Institute, compared with three last year. While Karolinska rises from the 61-70 band to 51-60, Uppsala and Lund universities exit the tables.