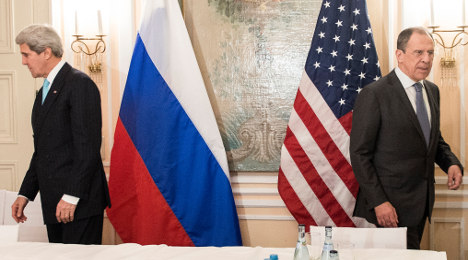 The US's John Kerry and Russia's Sergei Lavrov are set to meeet faceto face in Paris on Wednesday for what will no doubt be a tense meeting. Brendan Smialowski/AFP

The meeting in Paris was tabled several months ago and brought together US Secretary of State John Kerry and his Russian counterpart Sergei Lavrov.

Diplomatic sources said  the pair met at around 4pm.

The talks were supposed to centre around Lebanon but after the recent crisis in the Ukraine, all talk of the Middle East is expected to be overshadowed. “There will be discussions about the Ukraine,” a source close to the President confirmed to Le Parisien newspaper.

The French president François Hollande is likely to move the talks on to more pressing matters, the crisis in the Ukraine, and Russia’s intervention in the Crimea, which has sparked a war of words between Washington and Moscow in recent days.

The US has accused Russia of creating a "pretext" to invade Ukraine and President Barack Obama said his Russian counterpart Vladimir Putin "was not fooling anyone".

A senior adviser to the Kremlin Sergei Glazyev has accused the US of breeching agreements by meddling in Ukraine.

For his part Putin has insisted Russia holds the right to defend its interests in Ukraine, but said force "was not needed for now", saying military intevention was a last resort.

Speaking ahead of the talks in Paris Ukrainian minister Andriy Deshchytsya said: "We want to keep good relations withthe Russian people. We do not want to fight with Russia." It has not been confirmed if Deshchytsya will meet with Lavrov himself.

Kerry comes face to face with Lavrov the day before an extraordinary meeting of the European Union, which will look at what possible actions the Europe could take against Russia to dissuade them from escalating the crisis.

British foreign secretary William Hague, will also be in Paris to hold trilateral talks with Kerry, and the Ukrainian foreign minister, who was invited to Paris at the last minute.

In Paris to meet @JohnKerry @LaurentFabius and others to coordinate response to #Ukraine crisis. Time for Russia to talk to Ukraine

French Foreign Minister Laurent Fabius said he and Lavrov would discuss the escalating Ukraine conflict on the sidelines of the Lebanon Group meeting.

Russia's G8 partners have denounced Russia's moves on Ex-Soviet Ukraine and have suspended preparations for the G8 summit in Sochi in June.