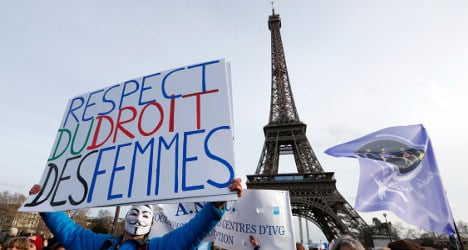 France has some of the highest rates of stalking and violence against women in Europe. Photo: François Guillot/AFP

Thirty percent of French women have been pestered with unwanted or offensive text messages, have been followed or had their property damaged by men who they didn’t want to date.

That's according to the European Union Agency for Fundamental Rights report, which was released on Wednesday. The data from 28 EU nations, puts France behind only Luxembourg and Sweden in Europe, as having the highest number women who have reported being stalked .

However, this high incidence of harassment appears to be closely tied to an alarmingly high rate of violence against women. France ranked fifth among European nations, tying with the United Kingdom, with 44 percent of women being the victim of some type of violence since the age of 15. In Europe as a whole one in three women have been subject to some kind of violent attack, which equates to 62 million women.

For a French women’s rights group the results are sadly unsurprising in a country they say has poorly defined domestic violence statutes and a cultural history of tolerating or encouraging macho behavior.

“We are still a country that is patriarchal, male chauvinistic with stereotypes that are reinforced by advertising and other means which leave some perpetrators thinking that women have fewer rights than they do,” Solidarité Femmes spokeswoman Françoise Brié, told The Local on Wednesday. “We know the statistics well: a woman is killed every two and a half days and one in ten women is the victim of domestic violence in France.” According to the study results, France is well above the European Union averages for both violence and stalking, which stand at 33 percent and 18 percent respectively. In Europe as a whole one in three women have been subject to some kind of violent attack, which equates to 62 million women. In Denmark the rate was more than one in two (52 percent).

However, France's poor scores, as well as those of Sweden, which recorded the highest rate of stalking, and other Nordic countries, can partly be explained by the willingness of women in these countries to report incidents, as much as any shortcomings in law.

Campaigners point to the fact that in some countries in Europe women were less likely to be forthcoming about the levels of violence or stalking they had faced.

The researchers expect the amount of stalking to continue growing in Europe now that smart phones and the use of social networks has become ubiquitous. The technologies make it easier but also more tempting to send harassing messages.

The issue of violence against women, in particular domestic violence, has long been on the agenda in France.

Last November the government took steps to tackle the problem by announcing a €66 million three-year action plan, which included changing the way incidents are reported and creating a 24/7 helpline.

The government has also taken steps to tackle inequality in a country which has a longstanding reputation for have entrenched sexist attitudes.

Earlier this year a French short film on reversing gender roles went viral with 8.3 million views. “Oppressed Majority” shows men what they would have to put up with if they were women.