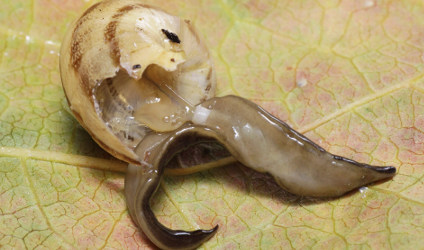 Snails, one of France's signature dishes, could be off the menu if the country fails to stem an invasion by a slimy worm from Southeast Asia, scientists warned on Tuesday.

The warning is being sounded over a voracious species called the New Guinea flatworm.

It is already on a list of the 100 most dangerous invasive species in the world as it has a relentless appetite for native snails and earthworms in places where it has been introduced.

Workers at a botanical gardens in Caen, Normandy, called in scientific help after they spotted a strange, dark, flat-as-a-pancake worm among their greenhouse plants.

Reporting in the journal PeerJ on Tuesday, a team of French experts said DNA tests had confirmed their worst fears: Platydemus manokwari has arrived in Europe.

"This species is extraordinarily invasive," said Jean-Lou Justine of the National Museum of Natural History. "I really hope it can be stopped at the earliest stages."

He added: "All snails in Europe could be wiped out. It may seem ironic, but it's worth pointing out the effect that this will have on French cooking."

The back is black olive in colour, with a pale white belly where its mouth is located. The head is elongated, with two prominent black eyes.

It has been introduced, sometimes deliberately, in more than 15 countries and territories in the Pacific. Biologists are alarmed by its appetite for snail.

The worm can even pursue gastropods up tree trunks — and when supplies of snails run out, it can tuck into other soil species, including earthworms.

The worm's ancestral habitat is the mountains of New Guinea, at altitudes of 3,000 metres (10,000 feet) and above, where the temperature is moderate.

Tests have shown the worm can survive temperatures down to 10 degrees Celsius (50 degrees Fahrenheit), which gives it a good chance of surviving in temperate, snail-friendly parts of Europe.

"Platydemus manokwari represents a new and significant threat to biodiversity in France and Europe, which hosts hundreds of species of snails, some of which are endangered and protected," said PeerJ, a publisher of peer-reviewed studies.

"It is therefore important to consider the implementation of eradication and control of this flatworm."

P. manokwari has a distant cousin, the New Zealand flatworm (Arthurdendyus triangulatus), which has triggered an invasive-species scare in western Europe.

It has invaded the whole northern British Isles, and is blamed for big reductions in earthworms which play an essential part in aerating and fertilizing the soil.

Other European countries have set in place monitoring measures in a bid to prevent it being imported through plants and agricultural products.