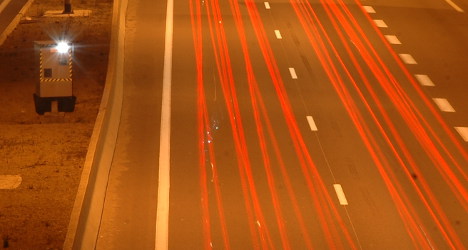 Where are France's most prolific speed cameras. Photo: Laurent Henschen/Flickr

It was another busy year for France's network of speed cameras last year, but some radars, as they are known in French, were working harder than others.

On average the speed camera on the A40 motorway near the tiny south-eastern French town of Clarafond-Arcine went off 377 times a day in 2013, giving it the dubious distinction of the most prolific speed camera in the country, according to data from the Ministry of Interior that was obtained by French magazine L’Express.

It dethroned 2012’s champion, the camera on the A10 motorway near the east-central city of Tours, which photographed on average 344 speedsters per day.  In third place on the podium was the camera on the A47 in Givors on the way to St Etienne, which flashed 326 times a day.

Not surprisingly, the cameras that were the biggest producers in 2013 were ones situated in the far left fast lane on motorways where the speed limit drops for a certain section.

The country's nationwide network of 4,150 cameras, mostly reviled by French drivers, that churned out about 11 million speeding tickets last year, according to the data.

Last year however was the first time since the cameras were introduced in 2003 that the system turned out fewer tickets. With 2.3 million fewer fines going out to speed demons, that’s a 10.8 percent drop over 2012.

That trend is likely to continue as drivers get the message and slow down, which authorities believe played a role in France's record low number of traffic fatalities in 2013.

Also the roll-out of the camera system is nearing completion, only 150 new cameras added last year and a mere 50 are expected to come online in 2014, the number of tickets could keep dropping.

French drivers have already found ways to rebel against the cameras. For example, a drivers' advocacy group put out a list on the sneakiest cameras in the country.

But if that wasn't enough help, see L'Express's list of the 100 'flashiest' speed cameras by CLICKING HERE.