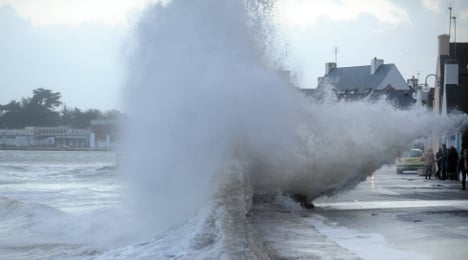 France's Atlantic coast was once again one alert for flooding on Monday. Photo:Fred Tanneau/AFP

Forecasters were once again forced to issue flooding alerts for France’s western coast on Monday, as the latest storm, named Christine, lashed the region. The combination of gale force winds winds of up to 120 km/h and high seas are set to pose a danger throughout the day.

After a winter in which the Atlantic coast has already been repeatedly lashed by storms and coastal flooding, storm Christine is the 29th to strike land.

Waves were expected to reach 14m high in the Gulf of Gascony on Monday afternoon, which will coincide with a high tide.

Weather service Météo France says the risk of flooding is more severe because much of the Atlantic’s coastal flood defences were weakened by storms in February.

"Due to this combination [of high tides and stormy seas] and the coastal erosion since December, it is very important to take caution," said one forecaster from forecaster Météo Consult.

In all 11 departments on Orange alert from Finistère in Brittany down to the Basque coast. Pyrénées-Atlantic was also placed on red alert on Monday morning, because of the severe risk of coastal flooding posed by high waves and tides.

"The department of Pyrénées-Atlantiques is exposed to real danger," said a Météo Consult forecaster.

"The violence of the elements will result in a lot of damage. The population should stay away.''

On Sunday, despite the warnings being issued, a member of a group of hikers died in Brittany, when they were swept into the sea.