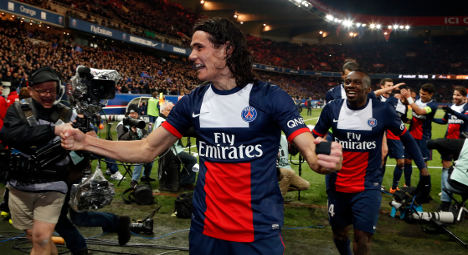 Laurent Blanc's side notched up their 19th win in 27 outings, against just one defeat, as they rode second half goals from Brazilian left-back Maxwell and Uruguayan Edinson Cavani to see off Jose Anigo's side.

Blanc's men locked up shop following the goal and rarely gave Marseille a clear cut chance as they extended their record to 16 wins and three draws after opening the scoring.

Cavani, who came on as a second-half substitute after a month out injured, then sent the Paris faithful into raptures with a powerful headed finish with 11 minutes remaining to put the gloss on a fine evening's work.

"It was very hard to be out injured for a month so I'm very happy tonight," Cavani told Canal Plus TV following the match.

"It was a great goal and I just want to thank my teammates and to thank God for allowing me to come back tonight and score," he added.

Following second-placed Monaco's 2-0 reverse at Saint-Etienne on Saturday, PSG are red hot favourites to retain the title they won last season for the first time since 1994.

The capital club also play Lyon in the French League Cup final and stand onthe brink of the Champions League quarter-finals after thrashing Bundesliga side Bayer Leverkusen 4-0 in the first leg of their last-16 tie in Germany.

Earlier on Sunday, Lille's Ivory Coast international Salomon Kalou fired a hat-trick to lift the northern French club past Ajaccio 3-2 in Corsica and back into third spot.

The former Chelsea striker cancelled out compatriot Junior Tallo's shock first minute opener to level the match from the penalty spot on 25 minutes before scoring again seven minutes before half-time to put the visitors ahead.

Tallo levelled the match for the basement dwellers, who have won just two games all season, just before half-time before Kalou completed his hat-trick, again from the penalty spot, 16 minutes from time to give Rene Girard's side three crucial points.

"It's really a miracle that we won tonight," said Girard.

"It was crucial to get third place back. Saint-Etienne have come back strong the last five matches and we have been battling for results for some time.

"The only thing positive from this match is the three points and we're going to have to show a lot more in the coming weeks to keep our position."

Lille now have 49 points, one ahead of Saint-Etienne in the race for third place and the final Champions League spot.

Ajaccio remain rooted to the foot of the table 13 points adrift of safety, and looking increasingly doomed to playing second division football next season.

Elsewhere, Lyon were held up in their bid to gatecrash the top three with a 0-0 home draw against Montpellier.

In a match that lacked inspiration for the neutrals, Remi Garde's men moved into a tie for sixth with Reims but remain seven points back of third-placed Lille.

Montpellier, the 2012 champions under Lille coach Girard, continue to ease away from the relegation zone under Rolland Courbis and are now joint 11th with Lorient and 11 points above the drop zone.