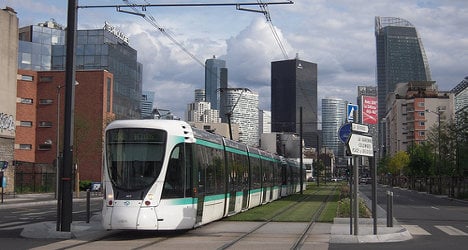 €6 billion in French public transport projects are on hold because of the ecotax controversy. Photo: Marsupilami92/Flickr

The projects would mean new or extended bus, tram (streetcar) and Metro services in cities across the country, but without the revenue that would have been raised from the "ecotax", they are now in doubt, French media reported.

FranceInfo radio published a list on Monday of the projects which had asked the government to fund up to 20 percent of the work.

The money was to be drawn from the €450 million in revenue authorities expected to collect from the tax on heavy goods carrying lorries, that was due to be introduced in January, before violent protests persuaded the government to drop it.

The projects touch every corner of France and include tram lines in Marseille, Strasbourg and Nantes as well as bus services in Lille and Annecy. Of the 120 projects 52 aim to improve bus services and 16 other would mean new or extended tram services.

While the stated goal of the ecotax was to promote greener commercial transport, it was attacked by opponents as a job killing measure for rural areas. The proposal sparked a series of violent protests.

The ‘Bonnet Rouge’ movement in Brittany – named after a 17th-century Breton tax revolt–was behind some of the most virulent opposition. Following a particularly violent protest that saw ‘Bonnet Rouge’ members tear out 15 toll gates installed to help collect the tax, the government announced in October 2013 it was suspending the levy.

"Courage is not obstinance, it is listening, understanding," Prime Minister Jean-Marc Ayrault told reporters after shelving the tax. "This is why I have decided to suspend the implementation of this ecotax, to give the time needed for dialogue at the national and regional level.”

Initial reports said the suspension of the tax would cost the French government up to €800 million.