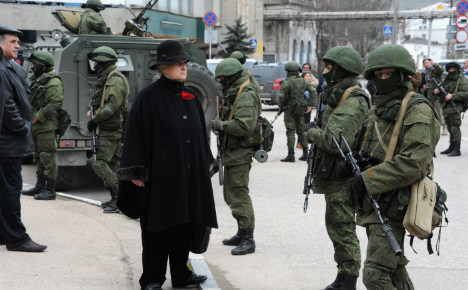 A woman faces up to armed men in unmarked uniforms in the Crimean port city of Sevastopol. Photo: Viktor Drachev/AFP

"France wants preparations for the Sochi G8 summit to be suspended," Laurent Fabius said, "until our Russian partners have returned to principles compatible with those of the G7 and G8".

"We condemn the Russian military escalation," he told French radio, after President Vladimir Putin obtained the green light from parliament to invade its neighbour Ukraine.

US President Barack Obama consulted with France and Canada's leaders Saturday to discuss the crisis in Ukraine, vowing to work together on an aid package to the hard-hit country, the White House said.

In Obama's separate phone calls with French President Francois Hollande and Canadian Prime Minister Stephen Harper, "the leaders agreed that Ukraine's sovereignty and territorial integrity must be respected, and expressed their grave concern over Russia's intervention in Ukraine," a White House statement said.

It added that the leaders "pledged to work together on a package of support and assistance" and also "agreed to continue to coordinate closely, including bilaterally, and through appropriate international organizations."

Obama earlier in the day told Russian President Vladimir Putin in a 90-minute phone call that Russia had violated international law with its incursion into Ukraine and warned of US and allied reprisals.

Francois Hollande meanwhile on Saturday called his Russian counterpart Vladimir Putin and urged him to refrain from resorting to force in neighbouring Ukraine.

"He expressed his deep concern" following the Russian parliament's decision to authorise the use of force in Ukraine, where the pro-EU opposition ousted Putin's ally from power last month.

Hollande "urged him to avoid resorting to force and to seek a resolution to the crisis with the international community," said a statement from the French presidency.