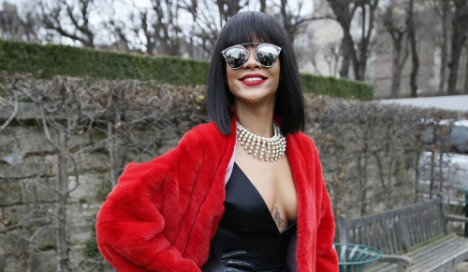 Simons said his autumn/winter 2014/15 collection was all about women with "power and energy" and giving them "freedom and possibilities in the way they dress".

Combining the traditions of men's tailoring with the "Dior vision of the 'flower woman'", Simons offered double breasted coats — laced like corsets at the side — and trouser suits in a palette ranging from dark navy and camel to fuchsia, bright blue and pink.

"The seductive 'flower woman' is still there, but emboldened by her business suits, made more sensual by masculine tailoring," Simons added in a statement, referring to founder Christian Dior's soft shouldered, fine waisted models.

New from Marant, meanwhile, were wide trousers and big shoulders, which the Parisian designer said helped give women attitude and feel strong and confident during grey winters.

The designer last year summed up her style as embodying a "certain carelessness which I think is very Parisian…. You dress up, but do not pay too much attention and still look sexy".

For this season, Marant said her starting point had been "khakis and shoulders".

"From these two points I did my own mixture," she said, adding that khaki trousers were perfect for the "modern warrior woman of the cities".

Looks included a grey wool jacket with puffed up sleeves and low-waisted trousers and long slouchy coats and cardigans.

Marant said the collection included a lot of woollen sweaters for winter comfort, "inspired by the roughness of military clothes". One jacket in rabbit fur was made out of small offcuts stitched together.

Last year, Marant was the latest designer to produce a collection for the Swedish fashion giant H&M.

The collection, which was available from mid-November, drew on her influential take on Paris chic.

Fashion fans in London queued for hours from early morning last November to get their hands on pieces from the collection.

Nine days of ready-to-wear collections for autumn/winter 2014/15, featuring some 90 shows, are due to wrap up on Wednesday with the highlight of the week — Nicolas Ghesquiere's debut at Louis Vuitton.