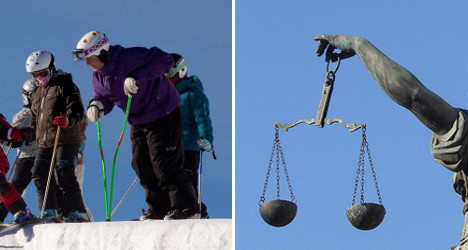 British Ski instructor Simon Butler gives a lesson on the slopes above Megeve, but he has ran into trouble with the French law. Photo Simon Butler/Flickr

On the slopes of one of France's swankiest ski resorts, a bureaucratic battle is raging between local authorities and British ski instructors that goes to the heart of Europe's labour laws.

The latest shot was fired on February 18, at the height of the season in the resort town of Megeve near Mont Blanc, when British instructor Simon Butler was hauled off a chairlift by gendarmes.

Held overnight in jail for questioning, Butler, 51, is accused of breaching French law by teaching without proper qualifications, despite having the highest-rated British ski instructor's license.

Two of his employees were also arrested and held overnight, and four more questioned the next day.

As far as local authorities are concerned, Butler is a serial offender who stubbornly refuses to obtain the required qualifications despite repeated convictions and fines.

He is due in court on April 7 on the latest charge and faces up to three months in jail if convicted.

"He is in total rebellion against French law," said Pierre-Yves Michau, the prosecutor in the nearby town of Bonneville.

But Butler sees more at work. He insists France is violating a key pillar of the European Union – the free movement of workers – and that he is being persecuted to drive away competition in Megeve to French-trained instructors.

"It's outrageous that I'm treated in the same way as a murderer, as someone that is breaking into your property," he told AFP at one of two chalets he operates in Megeve, a showpiece resort developed by the Rothschild family in the 1920s as an alternative to Switzerland's St. Moritz.

At the centre of the dispute are the different certificates issued by EU member states for ski instructors.

Butler and his team all have the level three or four certificates issued by the British Association of Snowsport Instructors (BASI) that are required by Britain to teach skiing on slopes like those in Megeve.

France issues its own certificates from the Ecole du Ski Francaise (ESF) and does not automatically recognise the British equivalents.

Prosecutors in Bonneville have repeatedly convicted Butler for working without the French certificate, including last year when he was ordered to pay a €10,000 ($13,725) fine and given a suspended six-month jail sentence.

"Mr Butler simply does not meet the conditions to teach in France," said Michau, noting that there is no system of equivalents between different European certificates

"We are going in circles with Mr. Butler. We cannot allow him to continue working with impunity… It's not a question of nationality," Michau said.

Butler and his lawyers say France's refusal to recognise British certificates violates EU laws on freedom of movement, in particular a 2005 directive on Europe-wide recognition of qualifications.

Michau denies this. "If this is what he believes than he should contest French law and have France condemned by the European Union," the prosecutor said.

The dispute is highly technical, but Butler says it stopped being "civilised" when he was arrested in mid-February.

After being forced off the slopes and warned he would be put in handcuffs if he "caused trouble", Butler was taken to a local police station and questioned for eight hours straight.

He said he was then told he would be held overnight and put into a cell that was "well-below freezing", where he spent the next 14 hours before facing further questioning.

After about 36 hours in custody, Butler was taken to court in Bonneville and formally charged, ordered not to leave France, not to work as an instructor and to report to police once a week pending his trial.

"There is a civilised, more mature way to debate and discuss these things," he said.

Michau said Butler was a potential flight risk and that his detention was not unusual given that "he has up to now been in no way cooperative" with police.

Butler's latest arrest sparked outrage among some in Britain.

London Mayor Boris Johnson called the dispute "a complete, naked, shameless and unrepentant breach – by the French – of the principles of the European Single Market."

"It is a simple case of French protectionism and racism rolled into one," said the deputy leader of the eurosceptic UK Independence Party, Paul Nuttall.

Butler said that after 30 years of working in Megeve he is considering moving his business – which employs 28 people and hosts about 100 guests a week from December to April – to Switzerland if he loses the case.

He said that would hurt Megeve, where he buys from local producers and where his clients pump money into the economy, because British tourists will stay away instead of using French instructors.

Angus Brook, on holiday from Jersey with his wife and eight-year-old daughter at one of Butler's chalets, said there was no doubt they preferred British instructors.

"There's obviously the language barrier which is the primary thing… It's a comfort thing especially for us with a young daughter," said Brook, 47.

"It does smack of a touch of monopoly, which in the European Union doesn't sound very fair."