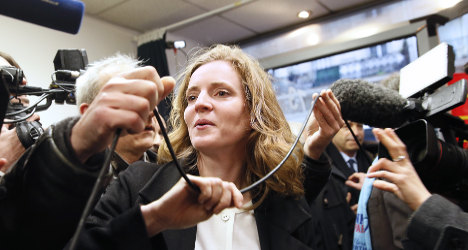 Can NKM put the light back into the city of light? Photo: Patrick Kovarick/AFP

The lights in the famous City of Light are going out, well that’s according to the conservative candidate to be Paris mayor Nathalie Kosciuscko-Morizet, or NKM as she is better known.

After 13 years of Socialists being in charge of the City Hall, Paris has fallen asleep and it needs waking up and more to the point it needs opening up, especially on Sundays the conservative UMP candidate believes.

“Paris has a reputation for being closed on Sundays. Parisians leave the city to do their shopping elsewhere," says the 40-year-old deputy former spokeswoman for Nicolas Sarkozy.

“You have Chinese visitors asking who don’t understand it, they think it’s crazy. Opening up shops on Sundays would not just be more practical, it would send a message: Paris was closed before, but now it is open.”

(NKM pictured with Nicolas Sarkozy during the 2012 election campaign)

Parisians no longer have a 9 'till 5 rhythm

NKM’s plan is to keep Paris open not just on Sundays but late into the night. She wants to make the city a real 24/7 metropolis to rival cities like New York and London by allowing shops, public transport and other services to open later.

“The nine to five rhythm is no longer the life of many Parisians today,” she said when unveiling plans to keep crèches and nurseries open longer hours to accommodate the change in working culture.

A plan to make Paris a more 24/7 capital is unlikely to go down well with the residents of some neighbourhoods in Paris, who complain that noise from late night bars is ruining their lives – but the city’s young people and students will no doubt welcome it.

Speaking to the Anglo American Press Association in Paris on Thursday NKM painted a pretty dismal picture of the French capital she hopes to steal away from Socialist candidate Anne Hidalgo, who is the current favourite to succeed mayor Bertrand Delanoë.

'Paris is a failure'

In terms of security, housing, and public cleanliness, Paris has become "a failure" under the socialist leaders, she says. She laments the fact those in charge of the city have shunned the use of more street surveillance cameras and that the city has become so dirty and clogged with traffic.

“The roads are even jammed at night in Paris now, that never used to happen,” she said. “Paris takes more energy out of you than it gives back.”

She blasts housing policies which have left Paris more divided than ever and forced middle classes to head over the Peripherique, the ring-road which surrounds the city like a noose, into the surrounding suburbs.

“Paris used to be a mixed city, but you need a lot of money to live here now. It is a city either for the most rich or the most in need,” she says.  “The middle classes cannot afford to live in Paris anymore. That is a failure of city management.”

Although NKM’s ideal would be to help those on average incomes remain inside the city boundaries, economic realities mean this would be hard to achieve. So instead she plans to take steps to ease the psychological trauma many Parisians feel when they cross over the Peripherique into the banlieues.

As part of her plan to reconquer waste areas and indeed wasted space she plans to cover up parts of the famous ring road, the source of so much of the city’s pollution. It’s a plan that could cost tax payers between €100 and €350 million. She would also do the same to the train tracks that lead out of Paris from two of the city’s main train stations Gare du Nord and Gare de l’Est.

One of her more eye catching projects is also to turn Paris's ghost Metro stations into places of leisure, like swimming pools.

The red carpet must work in both directions

Anne Hidalgo, NKM’s rival in an increasingly bitter race, recently launched a staunch defence of Paris at the expense of eternal rival capital city London, claiming it was safer, better for shopping, and for start ups.

NKM was reluctant to go down the same track and said it didn’t bother her if London rolled out the red carpet for French businessmen, as the UK Prime Minister David Cameron famously remarked.

The UMP candidate is only concerned that the red carpet is there so Londoners can head in both directions.

“I want the people of London to be as attracted by Paris as Parisians are by London,” she said.

One of the accusations often labelled at NKM is that she is not Parisian enough to be mayor of Paris, given that she is currently a deputy in the Essonne department and the mayor of the town of Longjumeau.

On paper it might appear as good a CV as her rival Anne Hidalgo, who has been quietly preparing for the role of mayor as the Town Hall's deputy since 2001.

But NKM bristles at the charge that her Parisian roots are inadequate.

“I was born in Paris, in the 15th arrondissement. I did all my studies here in Paris,” she pleads. “I have lived in Paris and my family has a history here. It is legitimate that people take different paths,” she adds.

Her campaign up until now has suffered a couple of bumps along the way, with critics claiming she is too bourgeoise. She was ridiculed for describing the grotty, overcrowded Line 13 of the Metro as being “a place of charm” and was then mocked by Twitter users for being pictured sharing a cigarette and a chat with some street drinkers.

But the combativeness of her mentor Nicolas Sarkozy appears to have rubbed off on her and NKM is refusing to give up without a fight. The race could be closer than many people suggest, especially if voters use the election as a protest vote against Hollande’s government.

Wisely, Hollande himself is staying well out of the way.