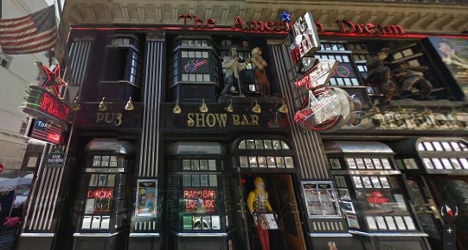 Some Anglo joints made the 'Worst of Paris' list including The American Dream. Photo: Screengrab/Google

The blog asked its readers to name the worst of the worst on the Parisian dining scene in five categories, including "The Biggest Rip-off", and 10,000 of them weighed in during voting that opened January 15.

The results may surprise you, although if you have been to some of these places, maybe not.

One of the biggest rip offs for voters was L’American Dream cafe on Rue Daunou in the 2nd arrondissement. With it’s €19.50 double bacon cheeseburger it could be slightly above the price expats are used to paying for the same delicacy back home.

The restaurant’s management insist that its products are of the highest quality and vigorously defended its honour.

“It’s completely false!” The prices here are completely comparable to anywhere else,” owner Charles Lellouche told The Local. “You can get a meal here at €15-20. Aren’t there a lot of places where you can eat for that same price? This isn’t a cafeteria after all.”

The nightclub Le Silencio, designed by American film director David Lynch, made the black list of places that are supposed to be cool, but are huge disappointments (. The source of discontent at the Rue Montmartre night spot is likely the requirement partiers buy an €840 yearly membership to get in. To be fair that payment allows one access to the film and cultural events put on by the Le Silencio people.

Though if you want to bring a friend along, the basic membership only allows for one guest, who would still have to pay a €15 cover charge.

Readers gave the title of worst bathroom to heavy metal club and restaurant Le Black Dog. Though if the toilets are apparently a bit iffy or even wiffy, people seem to otherwise love this spot on Rue des Lombards in the 4th arrondissement. An online reviewer raved about the South American inspired cuisine and prices: “Best Steaks in the city. Cheap pints. I'm not goth, but love good and cheap.”

When it came to the worst service most visitors to Paris would probably be shocked if there was a clear winer or loser, given the reputation the city has built up for grumpy waiters and poorr service.

But in the end voters decided that the waiters at Le Pierrot, a bistro and brunch joint on Avenue de la Motte-Picquet in Paris’s 15th arrondissement, were worthy of the 'honour' of providing the worst service.

Sounds like the workers there aren’t doing much to erase Anglo stereotypes of the cranky French ‘serveur’. However, customers told French daily Le Parisien: “No matter where you go in Paris, you’re going to find waiters who are either smiley or unpleasant.”

Readers saved the title of worst decor for a Chinese restaurant in the 11th arrondissement, which according to photos online, has a love for lion sculptures and fish tanks. Le Président may not be renowned for its owners' sense of style, but once again online reviewers mostly seem to adore the food.

Here is the complete worst of Paris restaurants and clubs list: