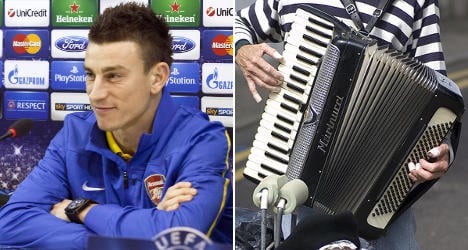 Laurent Koscielny, a footballer with a heart and a love of Made in France accordians, it seems. Photo: AFP/Photoverulam/flickr

Multi-millionaire modern footballers are often blasted for forgetting about their roots as they enjoy the high life but the same cannot be said it seems for Arsenal star Laurent Koscielny.

The central defender who has become a regular in the French national team has put his hand into his, no doubt deep pockets, to help save something quintessentially French – the accordion.

The Maugien factory – one of the last remaining accordion factories in France – in Koscielny’s home town of Tulle in the Correze department of central France is threatened with closure, which would mean the loss of 20 jobs.

French media reported on Thursday that Koscielny is part of a group of investors lined up to take over the factory at a reported cost of €600,000. It is not clear how much Koscielny is supposed to have stumped up.

The man who is believed to be responsible for bringing the footballer on board is the town’s mayor Bernard Combes, according to France Info radio.

It is believed Combes, who is an advisor to the president, personally highlighted the plight of the factory to the Arsenal man. If the factory is saved, then the French president François Hollande would owe a debt of gratitude to Kosnielny as well.

The town of Tulle is Hollande’s home turf and it was here, where he used to be mayor, that he made his first speech after being elected president in May 2012.

As the president battles to keep down rising unemployment, he could do with a few more French footballers digging in to their pockets.