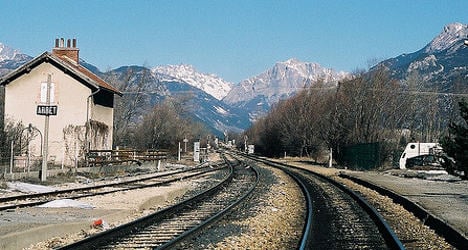 Ski industry chiefs in the Alps claims skiers are being "held to ransom" by rail unions who plan to strike on one of the busiest days of the year. Photo: Photo Monkey/AFP

French rail workers in the Alps are set to hold a strike this weekend that is planned to cause maximum misery to skiers on one of the busiest weekends of the season.

France’s state-owned railway SNCF, unions have given warning they plan to strike on Saturday March 1st and Sunday March 2nd in the south east of the country following a breakdown in negotiations with bosses.

The timing of the proposed action couldn’t be worse for French ski enthusiasts because this weekend is expected to see around 50, 000 travellers heading to and from the mountains on trains.

The industrial action is scheduled to take place between 5pm on Friday and 8am on Monday morning.

The call to strike has left bosses of ski stations up in arms.

Jean-Marc Silva, director of France Mountain, an umbrella group for tourism professionals, the strikers were "holding skiers to ransom".

"When you see how hard it is to make a living on tourism in the mountains…we have enough problems already between the school calender and the weather conditions, if are customers are now being held to ransom, it becomes impossible," he said.

Unions CGT and Sud Rail, which represent workers in the south-east Chambery region of France, which is the heart of ski country, blamed management’s unwillingness to negotiate over a “lack of resources.”

“This is not a bluff. We haven’t called a strike for such a busy weekend without taking all the elements into account,” Head of the local CGT Bernard Tournier told RTL. “Thousands of people are expected to travel this weekend. The real responsibility of management is to hear us out.”

There are still lingering hopes the strike could be called off.  But if talks don’t budge by Friday afternoon, travellers are looking at what could be nasty ride.

“But we are available until 5 pm on Friday to try and find a middle ground," he said.

Check the SNCF website for the latest news of the proposed strike.