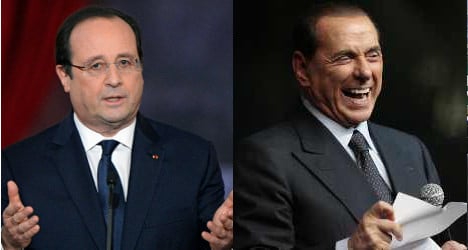 When even their president is being caught sneaking around behind his partner's back, it is perhaps unsurprising to find the French topping a poll for infidelity, alongside the equally hot-blooded Italians.

More than one in two men – 55 percent – from France and Italy admitted to cheating on their partners, along with one in three women.

And when it comes to being prepared to cheat ontheir partner, the Frenchare out on their own with more than one in three (35 percent) saying they could cheat on their partner if they could be sure of getting away with it. That compares to 25 percent of British people polled, 31 percent of Germans and 28 percent of Italians.

Another difference betweeen  the Anglos and the French is in terms of regret. Around half of British respondents who admitted cheating say they regretted the act, where as only 28 percent of French did.

"We can without doubt see the trace of Anglo-Saxon puritanism in terms of its moral morals and sexuality," Ifop director Francois Kraus told The Local. "In Britain there is more emphasis on security within a couple and on individual discipline," he added.

The poll by Ifop, released on Wednesday night, comes just a few weeks after "le scandale" in France, when President Francois Hollande was snapped leaving the home of actress Julie Gayet, on a scooter.

The photos led to the collapse of his relationship with long-time partner Valerie Trierweiler and a torrent of worldwide comment about French attitudes to fidelity.

The pollsters suggested a link between bed-hopping and religion, saying there was less evidence of cheating in "majority Protestant" countries.

Only 42 percent of Britons and 46 percent in Germany admitted to having an affair at some point in their lives.

"After all the noise about 'L'Affaire Gayet', and all the articles in the international press about the fickle nature of the French, this seems to confirm the cliches about latin males," Kraus told AFP.

Hollande and Italian leader Silvio Berlusconi, who was last year convicted of paying for sex with an underage prostitute at one of his infamous "bunga bunga parties", are "ultimately quite representative of their respective nations," added Kraus.

Infidelity is most evenly distributed between the sexes in Germany, where 43 percent of women admit to having had an affair. That compares with 34 percent in Italy, 32 percent in France and 29 percent in Britain.

The more disciplined couples of northern Europe are not complete angels, though.

Some 53 percent of Germans and 50 percent of Brits have exchanged an illicit kiss, compared with 46 percent in France, Italy and Belgium.

But it is the French that remain the most casual about flings, with 35 percent saying they may cheat in the future, against 31 percent of Germans and Spaniards, 28 percent of Italians, and a quarter of Brits.

The poll revealedthat three quarters of Europeans still believe it's possible to have a partner for life although French respondents were much more sceptical around the idea that a couple could remain sexually faithful to each other throughout their whole lives together. Indeed 63 percent of French people believe it is possible to love someone for life but not be faithful to them.

But Kraus told The Local that anyone with a French partner should not become too paranoid after reading the report.

"It's not like the French are way ahead of the rest of Europe when it comes to infidelity. The phenomenon is not chronic in France," he said.

A total of 4,800 people aged 18 and over were quizzed for the poll across six Western Europe countries.

Opinion: The French reputation for infidelity is a myth