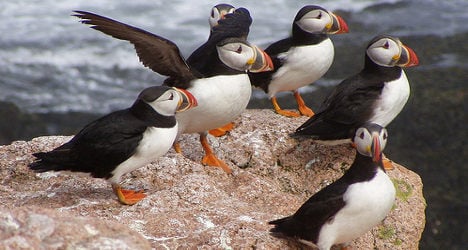 Over 21,000 seabirds, including Atlantic Puffins, have been died due to winter storms in France. Photo: U.S. Fish and Wildlife

More than 21,000 sea birds have died since the end of January on France's Atlantic coast due to storms in the worst "slaughter" in a century, the national Bird Protection League (LPO) said Wednesday.

A total of 21,341 dead birds had been counted up to February 24 on the southwestern Basque coast and in Brittany in northwestern France, a statement said.

The worst affected species were the Atlantic Puffin, the Common Murre or Common Guillemot and the Razorbill, it said.

Nearly 2,800 were housed in bird protection shelters in these areas, the LPO said, adding that this was a provisional toll and the final numbers could be much higher.

It said the count had been carried out over three weekends and involved more than 500 volunteers.

The birds basically died of starvation, LPO's Nicolas Gendre told AFP, adding that the "storms had forced the birds to areas that are less rich in food".

He said the last such toll only occurred in 1900. Gendre said that the birds used up more energy to survive and seek food during storms.

Although most of the bird deaths were caused by the weather conditions, the LPO said there had also been some caused by pollution as a result of cargo ships taking advantage of the inclement conditions to dump noxious gases at sea.