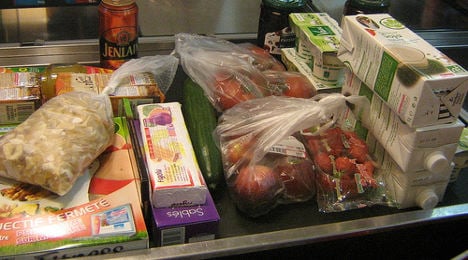 After buying a basket of goods in over 3,000 stores across the country the French consumer association UFC-Que Choisir  finally has the answer for what it was looking for –  the cheapest and most expensive supermarkets in France.

In terms of the cheapest, that title goes to Leclerc, and at the other end of the scale shoppers in France will feel it most in the pocket if they buy their fruit and veg at Monoprix.

Their conclusions were based on a basket or more likely a trolley of 78 goods which included Yoplait yoghurt and L’Oreal shampoo as well as numerous other everyday items.

Whereas in a Leclerc store in the town of Lanester near Lorient, in Brittany the trolley of goods will set you back €273, in Sceaux, a southern suburb of Paris those same products will see you paying out €394 if you pop to the local Monoprix – which UFC-Que choisir highlighted as the most expensive supermarket in France.

On average the price for this trolley of goods is €314 which represents a 0.2 percent rise on last year’s total, which the association described as “negligible”.

This list below shows the average prices of a basket of goods in France’s main supermarket chains, which shows an average difference of €67 between Leclerc and Monoprix for the same items.

The survey also highlighted which regions and departments in France were the cheapest to shop in. The conclusion was clear, if you want to eat for cheap, then head to Brittany, the west of the Pays de la Loire region and Poitou-Charente.

The most expensive regions for supermarket shopping are unsurprisingly Paris, the surrounding region of Ile de France as well as Corsica, where a trolley of goods will set you back on average €20 more each time.

UFC Que-choisir have collated their data online to make it possible for residents in France to find their cheapest supermarket. You can find yours by CLICKING HERE.