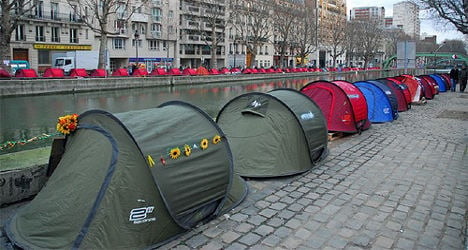 France has around 2.4 million empty properties, 40,00 of which are believed to be in Paris. Photo: Thomas Coex/AFP

They point to the findings of a new study which revealed there are 11 million empty properties across Europe, including 2.4 million in France. All that needs to happen is to hand some of these empty homes over to the estimated 4.1 million who are without a home.

In France there are an estimated 274,000 people living either rough on the streets, in shelters or in short term accommodation. According to stats quoted by Reuters news agency that is almost half the number of people living homeless in the USA, which has a population five times that of France.

In terms of the number of properties lying unoccupied, France is not the worst offender in Europe.

That mantle goes to Spain, which has 3.4 million vacant homes. Italy is estimated to have 2.2 million empty properties and Germany has slightly fewer at 1.8 million. The UK has around 700,000 properties that could potentially be occupied but are instead lying empty. Ireland has 400,000 and Portugal 735,000.

Freek Spinnewijn from the FEANTSA, a European-wide organisation that brings together national bodies fighting against homelessness told The Guardian: “Even half of these empty properties would be enough to stop people from having to sleep in the streets.

The study was carried out by several organisations fighting against homelessness and was published in Britain’s Guardian newspaper this week.

Despite the number of empty properties in France, the parliament recently passed a bill that sets a target of building 500,000 new properties each year, around 150,000 of which will be social housing.

The issue of empty homes in France is more acutely felt in Paris, where there is a high demand for apartments – around 7 percent of properties are believed to lie empty.

Last year French Housing Minister Cécile Duflot visited a group of squatters who had taken over an empty office building in the French capital. Although Duflot did not support the action, she wanted to show she understood the problems homeless people face.

The blame for the Europe's empty properties has been laid squarely at the feet of the housing market and its investors.

“Houses are built for people to live there. If they are not occupied then there is something seriously wrong with the housing market,” David Ireland from the organisation Empty Homes told The Guardian. His charity campaigns for empty properties to be turned over to those who need them.

Most of these houses are probably degraded or poorly located but there is still enough to solve Europe’s homelessness problem,”he added.

The problem of empty properties is felt most acutely in Spain, where the numbers have risen by 10 percent in the past decade.

The pre-2008 housing boom is to blame, when Spanish builders were putting up 800,000 new homes a year. Many of them are in holiday resorts, where thousands still lie empty.