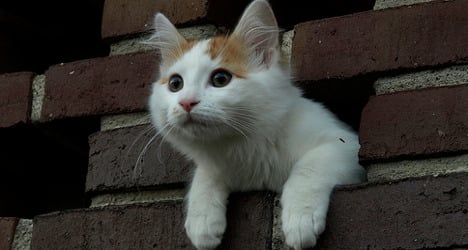 A hero cat named "Meatball" (not the cute kitty pictured above) is credited with saving the lives of ten residents at a farmhouse in southern France. Photo: Road Traveller/Flickr

When a blaze broke out in the attic of a farmhouse that had been converted into several apartments in a tiny village in south-eastern France the consequences could have been tragic for the occupants.

But thankfully a cat’s keen senses saved the day as well as the lives of seven adults and three children who lived in the farmhouse.

Alexandra Marlin was awoken from a deep sleep in the early hours of Sunday morning in La Bégude-de-Mazenc by the sound of her cat “Meatball” (boulette) scratching on the floor of the attic. The woman, half asleep, rolled from bed and went to see what the kitty was up to.

But when Marlin yanked open the trap door that leads to the attic and was just about to yell for Boulette, she noticed for the first time the fire burning in the space above her home. In terror she rushed to call firefighters and thankfully escaped the burning house.

But during the moments that followed owner became separated from her cat.

“After calling the firefighters, I went back in the house to cut off the electricity. Because Boulette is often at my heels I was afraid she got stuck in the house without me seeing her,” Marlin told French paper Dauphiné Liberé.

It was starting to look like, after saving the life of her owner and possibly the neighbors, she was the only victim of the fire. But thankfully , Boulette was fine, she had simply run off during the chaos of the fire.

She finally turned up again on Sunday evening, a bit timid after the ordeal, but otherwise perfectly fine. The events have brought owner and pet closer.

“The bonds of affection that bind us are even stronger than before. I have more respect for her. To think that she certainly saved my life and that of my neighbors, it will count forever in how I think of her,” Marlin told Dauphiné Liberé.

The neighbors were pleased as well and, via text message, offered free food for life to the hero cat.

“Great, Boulette is back! We will pay for a year of the best cat biscuits. She deserves it!" the text read.