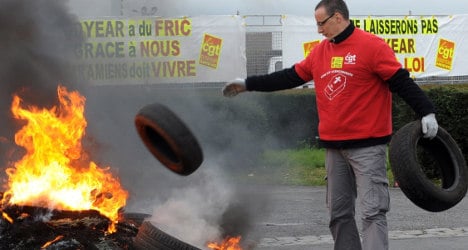 A worker at a Goodyear tyre plant in northern France protests over the threat of closure last year. Photo: François Le Presti/AFP

The French parliament on Monday definitively passed a law slapping tough penalties on firms who shut down without looking for a buyer in three months' time.

The so-called "Florange law" is named after a steelworks in northern France where Socialist President Francois Hollande told workers facing layoffs that he would pass legislation to protect their rights in case of a shutdown.

That was in 2012 when Hollande was campaigning for president. The law however came too late to stop steel giant ArcelorMittal from shutting two blast furnaces in Florange in northern France last year.

The law makes it compulsory for any company that employs more than 1,000 workers to look for a buyer for a site they want to close in three months' time.

The amount of the fine will also take into account the financial health of the company and the efforts it has undertaken to look for a buyer.

The law also provides safeguards against attempts to take over a company by building up a dominant position in its shares.

However the threshold at which a predator would have to make a public buy-out bid for all of its target's capital was maintained at 30 percent.

The ruling Socialists along with their Green coalition partners voted for the law but the centre-right UMP party of former president Nicolas Sarkozy voted against it.