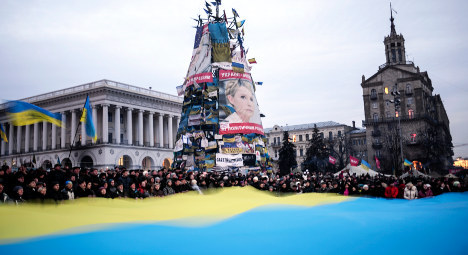 French President Francois Hollande said in a statement on Sunday that Ukraine's territorial integrity "must be respected" following a tumultuous week that saw a sudden change in leadership and new presidential elections called.

His appeal echoed those of the United States, Germany and the European Union amid fears that Ukraine could fracture along its Russo-Ukrainian linguistic and cultural faultline.

German Chancellor Angela Merkel spoke by phone with Russian President Vladimir Putin and "both agreed that Ukraine must quickly get a government capable of acting and its territorial integrity must be preserved," her spokesman Steffen Seibert said.

A day after Ukraine's three-month crisis culminated in parliament ousting the pro-Russian Viktor Yanukovych as president and calling new elections, Merkel and Putin also stressed the need for stability in Ukraine.
"They underline their common interest in the stability of the country in political and economic respects," Seibert said in a statement.
He said Merkel and Putin had agreed to remain in close contact. There are fears that Russia will support a breakaway movement in the pro-Russian east of the country.
The Ukrainian parliament appointed an interim leader Sunday but fears have arisen abroad over the future of the ex-Soviet state, with its people split between a pro-Russian east and a nationalist Ukrainian-speaking west pushing for closer ties with Europe.