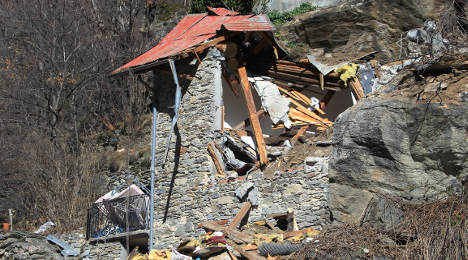 A picture taken on February 23, 2014 in Isola Village (French Alps), shows the site of the mountain cottage destroyed by a rockslide which killed two children. Photo: Jean-Christophe Magnenet/AFP

A massive rock crashed into a chalet in the southeast French Alps on Sunday, killing two children and injuring five others, police said.

The children, aged seven and 10, were asleep at the time of the accident in the village of Isola in France's Alpes-Maritimes region.

A block of rock about 10 metres (32 feet) high came hurtling down on the chalet, which had been converted from a sheepfold, and was rented by the children's families for the school holidays, local gendarme official Gael Marchand said.

Five adults were rescued and were found to have suffered light injuries.

About 60 paramedics and firefighters had been deployed in the rescue effort, aided by sniffer dogs.

Commander Marchand said the rock could have fallen due to having been weakened by heavy rains recently.

Heavy rains and consequent floods had cut off many roads in the area in January and the nearby Isola 2000 ski station was also shut down due to avalanche fears.

There was a similar incident in Italy earlier this month (see image below) when a boulder smashed into a French farmhouse but lucklily no one was killed.

Wow — now this is one way to crush grapes! Boulder barely misses house in Italy… pic.twitter.com/ZzC40OSiaC