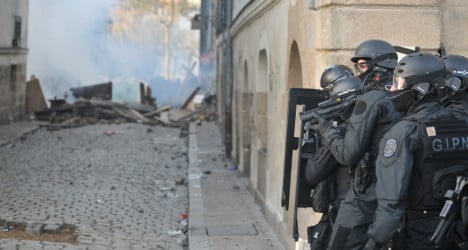 France's prime minister on Monday moved to heal tensions within the Socialist-Green government coalition which surfaced following a violent weekend protest over a new airport he has championed.

The Socialist premier, Jean-Marc Ayrault, had on Sunday accused leaders of the Green EELV party of adopting an ambiguous stance towards clashes which devastated the centre of the Atlantic port of Nantes on Saturday evening.

The EELV condemned the violence while praising the size and strength of the mobilization against the proposed construction of a major new airport serving most of western France on a site near Nantes which is known as Notre-Dame des Landes.

As a former mayor of Nantes, Ayrault has been a leading advocate of the project, which is being fiercely resisted by an army of eco warriors who have occupied parts of a site they regard as a valuable wetland environment and a haven for wildlife.

Ayrault's comments on Sunday triggered a wave of speculation in the media and from the opposition about an imminent reshuffle possibly involving EELV's departure from the government.

"For me there is only one solution and that is the Greens leaving the government once and for all," Jean-Francois Cope, the leader of the centre-right UMP party, said on Monday.

Ayrault made it clear that was not on the immediate agenda. "We need everyone (in the government), all those who want to take part," he told reporters.

A departure of the Greens would not threaten the stability of the government with the Socialist Party commanding a parliamentary majority without needing to rely on their junior partners.

Tens of thousands of opponents of the airport project turned out in Nantes on Saturday for a protest which degenerated into violent clashes between several hundred of them and riot police.

Scores of shop windows were smashed by masked black-clad rioters hurling paving stones, bottles and flares while the police responded with volleys of tear gas and rubber bullets.

The new airport was approved in 2008 with an initial construction budget of 580 million euros($795 million).

Building is due to begin this year with completion now scheduled for 2019 at the earliest, compared to an initial target of 2017.