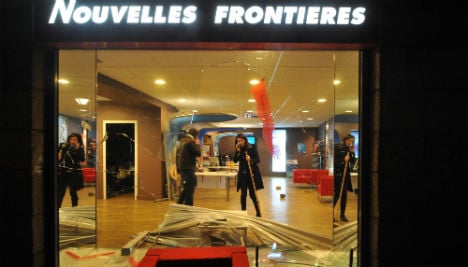 People stand in a travel agency which has been damaged in Nantes, western France, on the sidelines of a demonstration against the project to build an international airport. AFP Photo/Frank Perry

Tens of thousands of protesters against building the airport on protected swampland swarmed the western city's Petite Hollande square, the latest in a string of demonstrations against the pet project of Prime Minister Jean-Marc Ayrault.

But a short distance away, about 1,000 radical environmentalists staged a more violent protest, smashing shop windows and trashing a post office and the local offices of Vinci, the contractor on the airport project in nearby Notre-Dame-des-Landes.

The eco-warriors pulled up paving stones from the Nantes tramway and threw them at charging police, along with bottles, emergency flares and other projectiles. Six police were wounded in the clashes and four protesters were arrested, officials said.

Police said the more mainstream protest organisers were "overwhelmed by the radical fringe they've relied on from the start".

"In a democracy, the right to oppose and protest against a project is legitimate, but such violence is unacceptable, and nothing can justify it," he said.

Interior Minister Manuel Valls echoed his criticism and said the "ultra-left" and foreigners had turned the protest into "urban guerrilla warfare".

The protest comes two months after local officials gave the final go-ahead for preliminary work on the 580-million-euro ($795-million) project, which was
approved in 2008.

Construction is due to start this year but has not yet begun, and the target date for opening has been pushed back from 2017 to at least 2019.

The airport is set to have an initial annual capacity of four million passengers. Supporters say it will provide a major boost to tourism in western France and on the Atlantic coast.