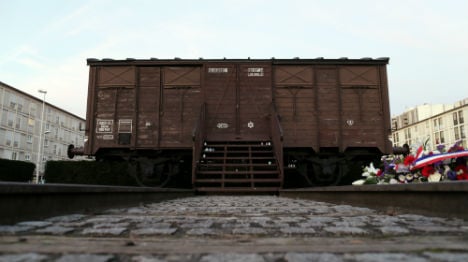 A photo taken in 2013 shows a train boxcar which symbolized the Drancy transit deportation camp, at the Holocaust memorial centre in Drancy. AFP Photo/Kenzo Tribouillard

The sensitive, decades-long issue of SNCF's role in the deportation of Jews to concentration camps — it recognizes it was a "cog in the Nazi extermination machine" — is threatening a reported $2.2-billion contract between the state rail company and the US state of Maryland.

A bill in Maryland's legislature wants to bar a subsidiary of SNCF from a public-private venture in the state, which borders Washington, DC, unless American Holocaust victims and their families are compensated by the rail firm.

After several informal meetings last year, United States and French diplomats began negotiations on February 6, lawyer Stuart Eizenstat told AFP. Eizenstat, Holocaust advisor to US Secretary of State John Kerry and part of the discussions, declined to disclose many details of the talks.

But he praised the French government, saying: "More than seven decades after the end of WWII, they initiated an effort to… do justice to Americans who were involved in the deportation to concentration camps by SNCF."

The lawyer, who has already obtained compensation for victims of the Holocaust in Germany, Austria and Switzerland, added only that the two sides "were trying to define" the number of victims concerned. The French Embassy in Washington confirmed talks had begun.

Under France's Vichy regime, SNCF sent some 76,000 Jews in freight cars to concentration camps between 1942 and 1944. Most later died.

In August, US lawmakers re-introduced legislation seeking to hold SNCF accountable, attempting to make the railway culpable in American courts and allowing US victims to pursue lawsuits against the company.

Similar legislation was introduced during the previous Congress, in 2011, but the measure stalled.