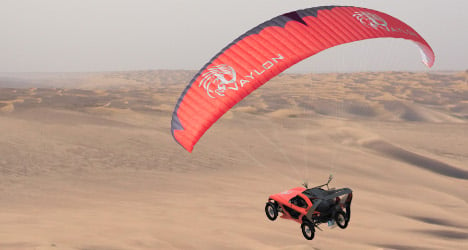 By next year a French-designed hybrid of a dune buggy and an ultralight aircraft could be the first flying car sold on the European market.

Pegasus, as it’s called, flies on a 38 square meter canopy and needs only a hundred metres to take off and land. It can stay in the air up to three hours at 60-80 km/h.

“The idea is to be able to move quickly on land or in the air, independently and in all circumstances,” Jérôme Dauffy, president of Pegusus maker Vaylon, told French daily Le Figaro.

He’s an aviation buff who has been working on the project since 2008. So far an aeronautics school and several companies that work in the market of specialized automobiles have been pulled into the effort to make the car a reality.

For the moment the car is just a prototype, but Dauffy has planned its maiden flight for the beginning of March. Assuming the tests go well the company, which recently joined a Parisian aeronautics incubator, will get to work on a sales strategy. The car would also have to meet European standards as well as crash and flight safety regulations. Dauffy said he hoped to have all this wrapped up, with the car on the sales floor, by 2015.

Potential buyers could encounter a little sticker shock as the car would be priced at €100,000 to start. Also, owners would have to have spent the money to get an ultralight pilot’s license, which requires about 20 hours of in-flight training.

While high-end hobbyists appear likely be the target market for the flying vehicle, Dauffy also imagines it as a good fit for the military and non-governmental organizations that work in remote locations.

In fact, the procurement arm of France’s Ministry of Defense has already invested €60,000 in the project and has ordered a prototype that it will put through technical and field testing between now and the end of the year.

“Less expensive than a helicopter, Pegasus would allow us to conduct reconnaissance, but also to intervene on rough or inaccessible terrain,”  a Defense Ministry a spokesman told Le Figaro. “For example, it could allow us to cross a river where the infrastructure has been destroyed.”

There are a few places the car won’t be able to go, however, namely over gridlock traffic at rush hour. Dauffy said the Pegasus won’t be allowed to fly near towns.

“The goal is to be able to move almost anywhere in the world,” he said.

Here is short video, that includes some French-language explanations, about the Pegasus: