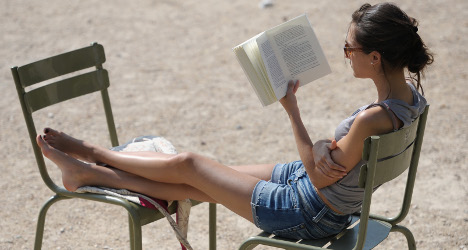 After the international success of Scandinavian crime writing, France's own small army of fictional detectives and amateur sleuths is sparking unprecedented interest from English language publishers on the lookout for the next big thing.

Christopher MacLehose, who discovered the late Swedish author Stieg Larsson for an international readership, says that after years on the sidelines, French crime writers are finally moving "centre stage".

"I think there is a wide feeling that Scandinavian crime which was a byword until very recently for potentially best selling crime fiction has tailed off," the founder of the London-based MacLehose Press told AFP.

In a sign of the growing interest in French crime writers, a US film adaptation of author Pierre Lemaitre's kidnap thriller "Alex" featuring.

Commander Verhoeven will begin shooting in Paris later this year. Lemaitre won the Crime Writers' Association International Dagger award for the book in 2013.

Complex and driven, Verhoeven, whose brilliance is a source of irritation to his bosses, stands a mere 1.4-metres-tall (four feet 11 inches) due to his mother smoking during pregnancy.

In "Alex" he is at first reluctant to investigate feeling that the kidnap case is too close to home — his own wife was kidnapped and killed a few years earlier and Verhoeven subsequently suffered a breakdown.

The novel's prequel "Irene" is also due to be published in the US and Britain in 2014.

Maylis Vauterin, of French crime fiction specialists Viviane Hamy in Paris whose stable of authors includes the best-selling Fred Vargas, said a new generation of crime writers had emerged since the house was set up as a niche publisher 20 years ago.

"At the time, the other French publishers were publishing only American authors and all of them were men," said Vauterin, adding that it took them 10 years to persuade a publisher to translate Dominique Sylvain's "Passage du Desir" which has just been published in English as "Dark Angel".

Vargas, the pen name for archaeologist and historian Frederique Audoin-Rouzeau, has won three International Daggers, twice for novels featuring her chaotic and sartorially-challenged Superintendent Adamsberg, a native of the Pyrenees region of southwestern France who likes to present himself as a bit of a country bumpkin in Paris.

Sisters Liliane Korb and Laurence Lefevre, meanwhile, who write the Victor Legris series under the pen name Claude Izner, have also fired imaginations with their Left Bank bookseller with a sideline in cracking Parisian mysteries such as "The Predator of Batignolles" or "The Marais Assassin".

Pilar Webb, Editorial Director of London-based Gallic Books which publishes the Victor Legris mysteries, said readers were disproving the once widely-held belief that contemporary French writers did not sell.

"Years ago it was very hard unless an author had won, say, the Goncourt (literary prize) to be looked at sympathetically by the bookshops," she said.

As a consequence, fans of English language crime fiction were now starting to benefit from a pool of talent that had only recently begun to be tapped.

Other French crime authors on Gallic's books include Andrea Japp, also US crime writer Patrica Cornwell's translator into French, Armand Cabasson, a psychiatrist who has set three of his detective novels against the backdrop of Napoleonic era France, and the late Pascal Garnier.

"He (Garnier) has turned into something of an indie sensation for us and had an awful lot of critical attention in a way which I think in the past a French author might not have done," added Webb.

Garnier, who died in 2010, was the author of around 60 books. Four have already been published in English by Gallic with a fifth, "The Front Seat Passenger", due out on March 3.

The film version of Lemaitre's "Alex" will be directed by Hollywood veteran writer, producer and director James B. Harris and producers have promised a "very high level" cast.

Webb said the combination of a US production, star names and a French location would introduce French crime stories to a mass audience worldwide.

"He (Lemaitre) has been a presence for some time. I think that (the film) could kick things off," she said.

At a time of increasing demand for crime writing across the board, MacLehose said the emergence of so many French authors represented an "inescapable development".

Larsson and Henning Mankell's decision to bring to an end his Wallander series.

"So many people sprang into print writing crime stories from Scandinavia…and quite a lot of the books then written in Scandinavia were much less good than the wagons they climbed onto," he said.

Now, however, French writers were finally coming into their own, he added.

"People ask if I have any Dutch crime writers and I say 'no, but I've been hunting and hunting for a good one'. Germany? Not yet, Spain? Not quite….there are one or two wonderful writers, but nothing to compare at present with France."