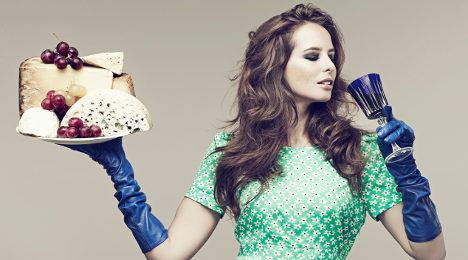 Smelly French cheese and elegant French women are celebrated by men around the globe. So what could be better than combining a bit of stink with a bit of chic.

That is the concept for the latest show at the Milk Factory, a pop-up gallery run by France’s national dairy group. It seems simple: Bring attractive young celebrities together with their favourite cheese.

Among the 18 ladies who made it onto the walls of the Milk Factory you will find Miss France 2007 Alexandra Rose, actress Julie Boulanger and Canal + weather girl Donia Eden.

They are among the 3,000 women who have signed up to a larger movement of the same name that was created by magazine editor Olivier Malnuit. He began asking women about their love of cheese in 2012 after realizing it was a somewhat complex subject.

Between the calories in a wheel of brie and the sometimes pungent smell, cheese may seem decidedly unfeminine. But as Malbuit told French daily Le Figaro, “there is a very strong relationship between women and cheese.”

The exhibition runs through April 26 at the Milk Factory which is at 5 rue Paul Bert in Paris’s 11th arrondissement. Entry is free.

CLICK HERE for a gallery of France's 'Filles a Fromages'

You can also watch this video of the photo shoot

What is your sexiest cheese?