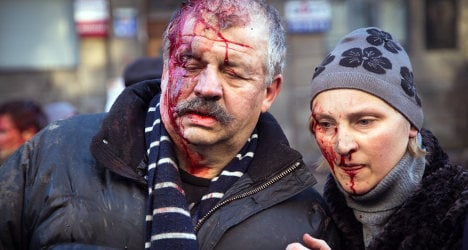 This photo from AFP shows anti-government protesters wounded after clashing with police in Kiev on February 18th, 2014. Photo: Oleksandr Ratushniak/AFP

French President François Hollande and German Chancellor Angela Merkel condemned the "unspeakable, unacceptable" acts in Ukraine during a joint press conference on Wednesday as the foreign ministers from both countries said they would head to Ukraine on Thursday.

"Unspeakable acts, unacceptable and intolerable acts are being carried out in Ukraine," Hollande said.

"The chancellor and myself and our governments condemn the violence, brutality and repression."

Earlier François Hollande warned Ukraine on Wednesday that EU sanctions were likely to be implemented in response to the violent crackdown on protesters that left 25 people dead, including several police officers, overnight.

Hollande has asked the European Union to put in place targeted sanctions against Ukrainian leaders by Thursday.

"He has asked the European Union to react rapidly and take decisions to put in place these sanctions at a affairs council meeting on February 20th," Hollande's office said in a statement.

"The President of the Republic has condemned the unacceptable police violence and called for its immediate cessation," according to a statement released by Elysée Palace. He agrees with "the need for rapid and targeted EU sanctions against the main perpetrators of such acts."

Woah. RT @bishopk: This is what dawn in #Kiev looks like from my hotel window pic.twitter.com/64riqhGf6O

French Foreign Minister Laurent Fabius warned Kiev that: "The people who are responsible for this cannot go unpunished. We cannot remain indifferent."

The minister added that there would "be consultations with our friends, the Germans, and probably sanctions" taken at a European Union level.

Fabius was speaking shortly before the start of the Franco-German summit in Paris which will bring together French President François Hollande and German Chancellor Angela Merkel and numerous ministers.

"It can be a whole scale of penalties, including personal sanctions against the elements that are causing the violence. A peaceful situation needs to be restored as soon as possible and both sides need to enter into dialogue," Fabius continued.
By Wednesday morning the country's health ministry had announced that at least 25 people had died in violent clashes overnight, and more than 200 people, including police officers and protesters, had been hospitalized.
Earlier the French minister had slammed the "indiscriminate use of force" in Kiev after deadly clashes between protesters and the Ukrainian security forces.

"I condemn the resumption of violence in Kiev and the indiscriminate use of force which has claimed several victims," said Fabius, calling on all sides to exercise restraint.

"Whoever is responsible for the decisions which have lead to the bloodshed in Kiev and other parts of Ukraine should expect Europe to reconsider its position on imposing sanctions on individuals," German Foreign Minister Frank-Walter Steinmeier said in a statement.

Steinmeier called on all parties in Kiev "to distance themselves from any provocation in this overheated situation."

"An escalation of violence is the last thing the country needs," he added. He also warned that Ukrainian security forces had a "special responsibility to de-escalate" the crisis.

Opposition leader Vitali Klitschko called on women and children to quit the encampment on Kiev's iconic Independence Square over fears of a possible police assault. But some 25,000 protesters remained on the square after the expiry of a 6:00pm (16.00 GMT) ultimatum from security forces demanding calm be restored.

Police said five civilians and two policemen had died in a day of clashes that turned parts of central Kiev into a war zone.

This is view on heart of #Kiev now. #kyiv #euromaidan #євромайдан pic.twitter.com/xMOo9N6jcw

Medics working at field hospitals run by the opposition earlier said that three protesters died of gunshot wounds and that around 150 others were injured, of which some 30 were in a serious condition.

Yanukovych's ruling Regions Party said that an employee at its headquarters was also found dead after protesters briefly seized the building.

One policeman died while being taken to hospital after being shot in the neck, the interior ministry said. Kiev police later said that a second policeman had died from gunshot wounds. Some 47 other policemen were wounded, authorities said.

Security forces issued an ultimatum, warning that they would take "grave actions" to restore calm if unrest persisted but no major assault had begun by the time the evening deadline expired. Kiev also shut down the whole of its vast subway network for the first time in the three month-long crisis.

The political crisis in Ukraine has snowballed into a titanic tug of war for the country's future between Russia and the West.

On Wednesday morning US Secretary of State John Kerry also condemned the violence and urged a return to talks and EU leaders have also expressed concern.

The EU's foreign policy chief, Catherine Ashton, said that she was "deeply worried" by the escalation of violence in Kiev and the reported death and casualty toll.

"I urge the leadership of Ukraine to address the root causes of the crisis," Ashton said in a statement.