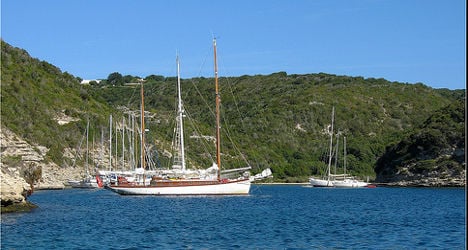 French police were hunting for four armed pirates who stole a luxury yacht in waters off the coast of Corsica on Sunday.

The 17-metre-long boat was taken from its owners by a gang of masked and armed pirates as they sailed in the beautiful waters off the idyllic south-western coast of Corsica, which is a popular yachting destination.

No one was hurt, but the owner, his wife and a friend were tied up by the pirates who snuck up on the yacht, named Armageddon, in a motor boat, Europe 1 Radio reported. The group had been sailing near the Îlots des Moines, north of Bonifacio, when they were taken hostage. After holding the terrified trio captive for three hours in a cabin, the pirates loaded then them into one of the yacht’s life boats and set them adrift in the Mediterranean Sea. They eventually washed ashore near the tiny village of Campomoro, which is north of where they were attacked, at around midnight.

Authorities said that type of attack was rare, but it will no doubt leave a few boat owners concerned about sailing in an area that is popular with private yachts and pleasure cruise boats.

A yacht trafficking ring that sent its plunder from France to Tunsia was busted at the end of the 2000s.

Five Frenchmen who participated in the network got 30 years in Prison in 2009, though the gang had some high-placed foreign connections. Two of the alleged masterminds were nephews of former Tunisian dictator Ben Ali, who is now in exile in Saudi Arabia.