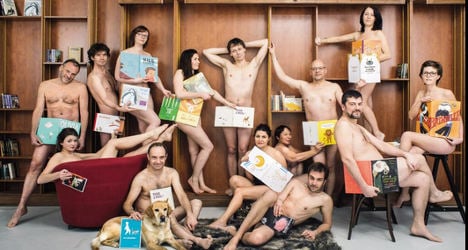 A few eyebrows were raised in France on Wednesday when a group of professionals from the literary world took their clothes off in a pointed protest towards the leader of the country's conservative UMP party, Jean-François Copé.

The publishers and book sellers sent out a press release titled, “Everybody get naked against censorship!” which carried the photo of them with their nether regions just barely covered by various tomes.

The nude protest stems from Copé's very public criticism of a children's book "Everybody Get Naked" two weeks ago.

The book which shows people from all walks of life taking off their clothes in an aim to calm children’s fears about their own bodies. But Copé said "his heart missed a beat" when he realized the book was recommended for use in primary schools by teachers.

We can only imagine that Copé's heart skipped another beat when he saw the way in which members of the literary world responded this week. Copé’s attack on "Everyone Get Naked" came amid an ultraconservative effort to push public libraries to pull from their shelves children’s book the extremists viewed as promoting gender theory or the idea one’s sex is flexible and not determined by birth.

The rumours were a hoax, but were part of an ongoing battle between the government of Socialist President François Hollande, which presided over the legalization of gay marriage, and right-wing conservative and fundamental Catholic groups.

One of those groups Civitas was ridiculed this week after it uploaded suggestive pictures on to its website that showed a woman giving a sex class. Civitas said the images were taken in a French school but in fact they were taken on an adult sex course in Canada. (see below)