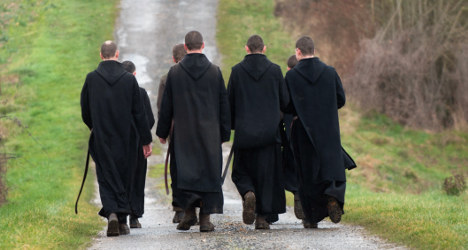 Monks from the Monastery of Fongombault, ten of whom have been booted off the electoral list. Photo: Guillaume Souvant/AFP

An unholy battle is raging in the tiny French village of Fontgombault, which stands in the shadow of the nearby Notre-Dame monastery, in the heart of France.

The village of 262 residents, located between the towns of Châteauroux and Limoges, appears to be deeply divided along religious lines.

The villagers who are of a more secular persuasion claim the village is "under the control of the monastery" and want to wrestle it back in the upcoming municipal elections.

The problem they have is that around one quarter of the 258 voters in the hamlet are monks who live in the abbey and two of them have served on the local council for the last 40 years.

But their bid to reduce the influence of the monastery was boosted earlier this month when they succeeded in booting ten monks off the electoral roll.

A court agreed that because the ten Benedictine monks no longer reside in the town, that they should be taken off the list. It emerged the monks have since moved to the Saint Paul des Wisques abbey in northern France.

The battle was lead by Fréderique Prudhomme, who set up the “Occupy Fontgombault” (Indignés de Fontgombault).

The group was angered after the local council officially condemned France’s legalization of gay marriage last year, stating that “the law of nature is superior to that of humans”.

The court’s decision provides a “glimmer of hope for secularism and that the commune can finally function” and “get back on the right track”, Prudhomme told local newspaper Nouvelle République.

“We are not fighting against the monastery or the church,” she said, “but against citizens having the right to vote in a town where they do not live.”

We will know whether "Occupy Fontgombault" win their battle when voters go to the polls on March 22nd.

The Benedictine abbey has been occupied in Fongombault since the 11th century.