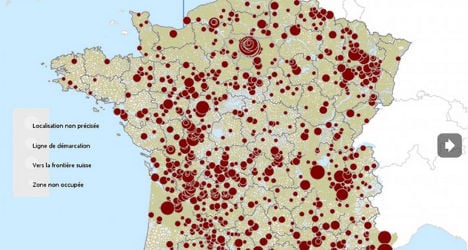 The new interactive map that marks the addresses of every one of the 11,458 Jewish children sent to concentration camps. Photo: tetrade.huma-num.fr

The new map underlines one of the darkest periods of French history when around 76,000 Jews were deported from France to Nazi death camps.

If you zoom in on the map, published last month by a historian and Nazi hunter, you will start to see tiny red dots appear on certain French streets. Each of those dots corresponds with a child or children who were ripped away from their families between July 1942 and August 1944 by the Nazis.

At 56 Cours Lafayette in Lyon ,17-year-old Jacques Sciandra was taken. Further down the street at number 89, Dario Sarfati was also confiscated from his parents. These children were sent to death camps with the knowledge and sometimes help of French authorities during World War II.

One of the men behind the map, Historian and Professor at École Normale Supérieure in Lyon Jean-Luc Pinol told The Local the data brought together on the document has long been available to researchers. But until now it has never been in a format that was easily accessible.

“It’s the power of the map, of visualizing what happened. The data was already online, but in an invisible way, which is to say charts and other not very handy ways,” Pinol said. “Over the last two days I have received plenty of messages from people saying ‘I entered my address and I was relieved to learn that no one was arrested here'. But other people have written to say they learned people were taken from their village.”

Pinol was responsible for the technical side of the project, which involved years of painstaking research carried out by lawyer and Nazi hunter Serge Klarsfeld. Klarsfeld himself escaped the clutches of the Gestapo at eight years old and would grow up to spend decades working to pull the victims of the Holocaust from obscurity.

Klarsfeld collected names, ages, photos, addresses and any other information which gives form to the some 76,000 Jews sent from France to the Nazi death camps, frequently aboard trains of the government-owned railway SNCF.

The railway's role in the slaughter recently prompted lawmakers in the American state of Maryland to propose legislation banning the company from pursuing public contracts there until it makes reparations to Holocaust victims and their families. An SNCF majority-owned company is seeking a €4 billion rail contract in Maryland.

Klarsfeld has focused specifically in his work on the Nazi’s effort to destroy French Jewish children and it culminated in 1993 with a memorial in their honour. He told French daily Le Monde it was needed “because it was the looting of innocence, the ultimate crime.”

The map could be used as a teaching aid to bring to light the reality of what happened during the Holocaust to another generation. Although in Paris around 20 schools are named after children sent to their death by the Nazis, the subject can appear far off for young students.

With the map children can type in their address and see who may have been taken from their home, neighbourhood or town.

“History happened here, where people were living,” Klarsfeld told Le Monde, “where they are still living.”