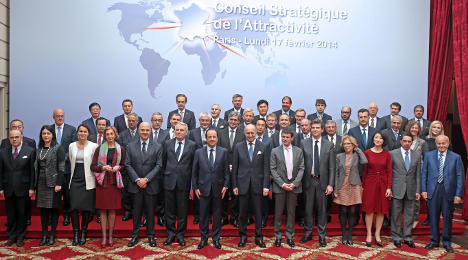 Hollande told a meeting of 34 of the heads of some of the biggest international firms that France “was not scared of capital and does not want to protect itself. We are not afraid of opening up to the world.”

Hollande was speaking at “Strategic Council on Attractiveness” summit, which brought together international business chiefs and government ministers and is aimed at trying to seduce more foreign investment in France.

The heads of leading companies including Volvo, Bosch, Siemens, Samsung, General Electric, Intel and Nestle were joined at the talks by chiefs of sovereign wealth funds from Gulf nations and China.

“Growth will return if trust is there. The challenge also involves welcoming foreign businesses in France,” Hollande said.

“We do not have a narrow conception of our national interests. We even consider the mobility of investment, from France to foreign countries and vice versa a factor in the success of the country.

"Everything must be done to quickly and efficiently to welcome foreign investments," Hollande said.

As The Local reported last month international investment in France has nose-dived unlike in other European power houses, where it has continued to grow.

But Hollande announced a series of measures aimed at persuading foreign investors to return to France. These include:

The president said a key goal was to "increase investments from emerging countries", who account for only about ten percent of capital inflows to France.

Hollande said he would hold a meeting every six months to discuss reforms.

Business chiefs have repeatedly cited Hollande's tax plans as a deterrent to investment, in particular a temporary 75 percent tax on high earners and a corporate tax rate that is expected to hit a Europe-wide high of 38 percent this year.

One CEO who was at the conference on Monday vowed to create thousands of new jobs in France if it did more to cut payroll charges.

“There remains a lot to do in France on the issue of taxation and in particular on the question of employment flexibility,” said Sir Ian Cheshire, the CEO of home improvement retailer Kingfisher.

“In terms of payroll charges last year, we paid €216 million. That’s nearly twice the amount of charges we paid in Britain with the same number of employees,” Cheshire said

He promised to invest by opening new stores in France if the French government made efforts to make it more attractive.

Cheshire also promised to invest in France if the government allowed DIY shops to open on Sundays, which the country’s highest court recently outlawed.

In an open letter in business newspaper Les Echos in December, some 50 heads of subsidiaries of foreign companies in France, including Coca-Cola, GE and HP, said it was "more and more difficult to convince" their head offices to invest in France.

Recently the president has also called for reforms of the cumbersome French nanny state. In a new year address to civil servants, he said the state machinery was "too heavy, too slow, too expensive," and vowed to focus on cutting expenditure.

"We will try and do this everywhere, or wherever possible," he said, pledging to make €50 billion ($70 billion) in savings by 2017. "Everyone must do their bit."

France has already unveiled a cost-cutting belt-tightening budget for 2014 that aims to bring down the public deficit from the current level of 4.1 percent to 3.6 percent of gross domestic product (GDP) through spending cuts totalling €15 billion and new taxes