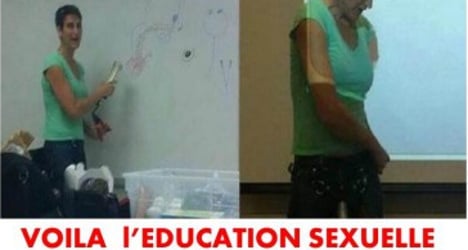 A French Catholic fundamentalist group stirred up controversy over claims that turned out to be untrue. Photo: Screengrab/Civitas

It was the latest move by France's extremist right wing groups to try provoke outrage directed at France's Socialist government.

Bearing the caption “Here is the sex education being taught to our children”, the montage drew much anger online after its posting to the Civitas website last week.

But it has emerged that the photograhs, weren’t taken from inside a French school at all. In fact, the photos were taken during a class taught in Canada by the owner of a Toronto sex shop.

The woman, Carlyle Jansen, hosts sexuality and pleasure classes for adults but throws in some STD prevention for good measure.

It was that portion of the class that led to French far-right watchdog group debunkerdehoax.org noticing the erroneous information. Debunker's eagle-eyed writers saw that on a white board at the head of the classroom the acronyms “HIV/AIDS” were written in English. That info led to the photo's true source.

After word spread in the French media the photos were from Canada, Civitas attempted to explain the error.

“Some media outlets of the system mocked Civitas for posting the photos, which were taken in Canada and not France. It’s true that a couple of days were needed to precisely locate the place where the photos were taken,” Civitas wrote. “We don’t have the means at the disposal of the media of the system.”

The incident follows a string of recent of high profile run-ins between far right ultra-conservatives and President François Hollande’s Socialist government, which presided over the legalization of gay marriage in May 2013.

Last week right wing groups encouraged their followers to go to French public libraries and demand the removal of books they deemed a threat to children. The books were either LGBT-friendly, such as the book “Jean has Two Mummies”, or dealt with children and sexuality.

It was a patently false claim spread by an activist upset over a new test program in French schools that teaches gender equality to children.

At issue has been something certain conservatives have dubbed gender theory, which they say is an attempt to teach children their gender is flexible and not determined by birth.

“France does not tolerate censorship in these beacons of the founding ideals of the republic,” she said. “I reaffirm my absolute support for library personnel and local elected officials who have to deal with this aggression."