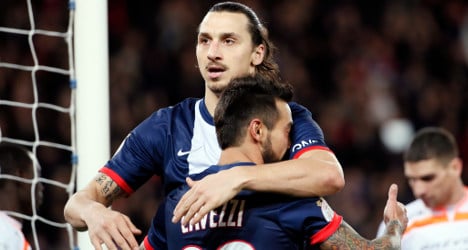 Lille's bid for Champions League qualification from Ligue 1 faltered again on Sunday as they only just scraped a 2-2 draw away to struggling Evian.

Rene Girard's side looked like genuine title challengers at the season's halfway stage, but have now taken just five points from six games in 2014 to lose touch on top two Paris Saint-Germain and Monaco and allow the sides behind them to close in.

They are also being chased hard by Saint-Etienne and Marseille who shared a 1-1 draw on Sunday evening, thanks to a 92nd minute equalizer for the home side.

Saint-Etienne remain one place and three points behind Lille. Marseille are in fifth place on 40 points, having gone ahead of Lyon on goal difference.

Lille fell behind at the Parc des Sports in Annecy when Kevin Berigaud headed home from Modou Sougou's cross a quarter of an hour in.

They soon drew level when 18-year-old Divock Origi cut in from the left wing and curled a shot from the edge of the box into the far corner of the net for his second goal in as many league games.

Evian were back in front just after the hour mark, as Lille's Pape Souare was penalised for handball inside the area and Cedric Mongongu stepped up to score from 12 yards.

However, Lille rescued a draw thanks to a Ryan Mendes cross from the right-hand side that dropped into the net at the back post deep in stoppage time.

The point does at least edge Evian three points clear of the relegation zone.

In Sunday's late game, Saint-Etienne and Marseille cancelled each other out in a draw as both sides chase a European spot next season.

Following a goalless first half, the deadlock was broken in the 64th minute by the unlikely figure of Nicolas N'Koulou.

The Cameroonian prodded the ball home from a free kick, needlessly given away by Saint-Etienne, some 35 yards out from their goal.

It was only N'Koulou's second goal in his career and the first time Saint-Etienne had conceded at home since November.

Andre-Pierre Gignac could have doubled Marseille's lead in the 83rd minute but was denied by a fine save.

And it proved to be costly. In injury time, former Marseille player Brandao's smart header levelled things up.

Earlier, Lyon boosted their own European hopes as they with a 3-1 win at home against bottom side Ajaccio.

Goals from Gueida Fofana, Jimmy Briand and Bafetimbi Gomis saw them move to within five points of Lille.

Lyon took the lead two minutes before the interval when Alexandre Lacazette found Fofana, who took a couple of touches to set himself up before curling a shot over Ochoa from 25 yards.

They then increased their lead midway through the second period as Henri Bedimo broke into the box and cut the ball back for Briand to head home.

Kenyan international Dennis Oliech got a goal back for Ajaccio but Lyon wrapped up the points when Gomis curled a delightful finish past Ochoa into the far corner of the net for his 10th of the campaign.

OL have won five of their six Ligue 1 games in 2014 and now look like genuine contenders for a top-three finish, while Ajaccio remain rooted to the foot of the table, nine points from safety.

"We have played 11 games in five weeks. That's a lot even if we still played with energy towards the end," said Garde, whose side have a gruelling week ahead with a trip to Ukraine to face Chornormorets Odessa in the Europa League on Thursday before travelling to take on Lille next weekend.

Elsewhere, PSG remain five points clear of Monaco at the top after both clubs won this weekend.

Ezequiel Lavezzi and Zlatan Ibrahimovic were among the goals as PSG eased to a 3-0 win against Valenciennes on Friday.

Two goals from James Rodriguez  gave Monaco a 2-0 victory away at Bastia on Saturday.