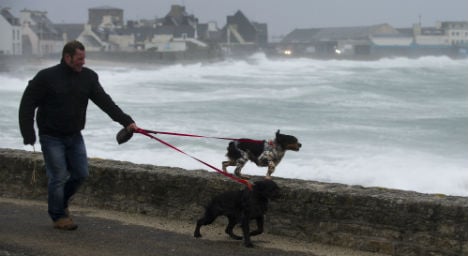 A man walks his dogs on the harbor of Le Guilvinec, western france, as the storm "Ulla" arrives on the coast of Brittany on February 14, 2014. Photo: Jean-Sebastien Evrard

The storm claimed at least one life, as an 80-year-old passenger on a cruise ship fell down and died in difficult sea conditions, according to French coastguards.

Another woman on board the same boat was evacuated by helicopter after also suffering a fall.

"Without any doubt, the two people fell because of especially difficult weather conditions," said Karine Foll from the local coastguard headquarters, adding that the wind there was currently blowing at more than 120 kilometres per hour.

The storm was set to rage throughout Friday night, forecasters said, causing huge waves and a rise in sea levels.