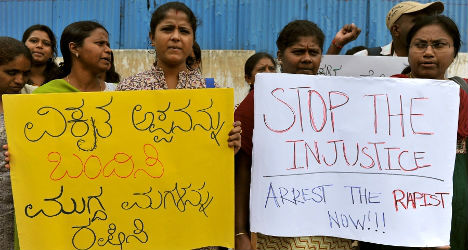 Indian activists call for the arrest of Pascal Mazurier in Bangalore on June 18, 2012. Photo: Manjunath Kiran/AFP

Special public prosecutor B.T. Venkatesh said that the judge Shubha Gowdar had admitted his application to bring the additional charge against Pascal Mazurier during a brief hearing in the southern city of Bangalore as there was prima facie evidence of him committing sodomy.

The judge had then told Mazurier's defence team to file any objections to the prosecution's application at the next hearing of the court which was set for February 24.

The judge is expected to set a trial date once a final decision has been made on whether to allow the additional sodomy charge, the prosecutor added.

Mazurier had on Monday pleaded not guilty to allegations that he raped his daughter in a case that dates back to June 2012.

The 40-year-old was arrested on a complaint filed by his wife and spent four months in jail before being released on bail.

Mazurier's lawyers had argued there was insufficient evidence against him, but the judge ruled in January that there was a prima facie case against him.

The wife and women's rights groups have accused France of supporting the husband at the expense of the interests of the alleged victim and her two siblings, who are all French nationals.

France's foreign ministry has declined to comment on whether it is paying the husband's legal bills.