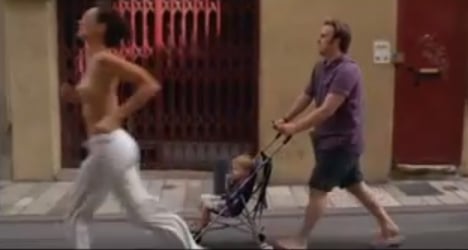 French screenwriter, actress and filmmaker Eléonore Pourriat's 2010 film "Oppressed Majority" (Majorité Opprimé) pulled in a few hundred hits after she posted it on YouTube in July 2012. But something strange began to happen at the end of January this year when the short film suddenly went viral, propelling her work in front of millions of eyes worldwide.

The simple story traces a day in the life of Pierre, a chubby stay-at-home dad whose day goes from simply annoying to really dangerous. But as the viewer watches the mostly humorous film he or she begins to realize Pierre is inhabiting the role usually reserved for women.

He's taking care of kids, putting up with bare chested female joggers who sexually harass him until finally the film reaches a horrible peak that is a reminder of the dangers women face daily just by walking in the street.

In an interview with The Local on Friday Pourriat talked about the inspiration for the movie and its stunning success. So where did the idea come from?

It comes from the fact that I am a woman. (Laughs) It comes from my daily life as a woman for the past 30 years. I decided I had to make a film about it, but from the inside, something men could understand. Often we talk about our experiences but we are not believed or end up minimized. So I decided to invert the roles and I thought maybe that way it would be easier to talk about how we feel.

I wanted to do something that happens in a rather realistic world so that the point of the film is not obvious from the start. But little by little it starts to come out; exactly the way sexism does in real life. It starts with the little things.

Is France a tough country for women?

Yes, more and more. I made the film four years ago and it has been getting worse and worse. When I first showed the film at festivals I felt that people weren't really affected by it. But now that this regressive mentality has gained ground there is a lot of feminist engagement around the film. It's good for my film, but it's not very good news for society.

It's not that there is more male chauvinism, but there is a stepping back on certain women's rights. There is a move stop abortion in Spain and all the controversy here about gender theory.

Did it surprise you that the film went viral?

I really didn't expect it. I posted the film in 2012 on YouTube and it didn't really do much. It had 500 views or something like that. But since the end of January it suddenly went off. I'm not sure what triggered it.  There was a similar movie that came out and then there is all the social context in France, that could have done it.

I totally didn't expect it to grow to such great proportions. It's not done yet. It's totally nuts.

And here's the movie: