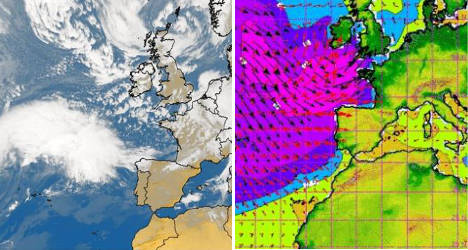 Residents in Brittany would be wise not to look at the weather forecast these days as once again it makes for grim reading.

The winter of storms, which have left parts of the western department of Finistère, devastated by floods was set to continue on Friday.

(The town of Quimperlé in Brittany under water after recent flood. Photo:AFP)

Heavy rain fell overnight on Thursday and the latest storm, named Ulla, is set to arrive by Friday afternoon, bringing with it gale force winds of up to 130 Km/h.

The north of Finistère, notably the bay of Morlaix is expected to bear the brunt of the storms. The coast is also at risk of flooding with swells of up to nine metres expected in parts.

The country’s meteorological service Météo France has reacted by placing the three departments in Brittany on Orange alert, meaning the winds will be strong enough to bring down power cables and trees.

The nearby departments of Manche and Loire-Atlantique also have similar warnings in place.

If you want sea what a storm looks like off the coast of Finistère then watch this stunning extract from a new film called "Human".