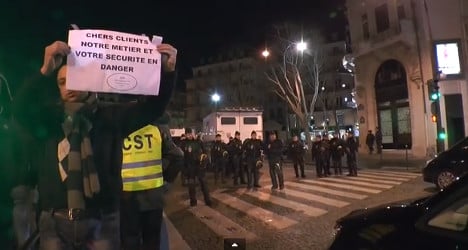 Taxi drivers hold a wildcat protest at Place de la Concorde in Paris this week, but on Thursday they agreed to end their protests. Photo: Screengrab TF1.

French taxi drivers said on Thursday they would end a series of traffic-snarling strikes after the government agreed to suspend the issuing of new licenses to minicabs.

The strikes this week had caused logjams on city streets and at airports, as hundreds of cabbies protested over competition from minicabs.

The government gave in to one of their demands on Thursday, agreeing it would not register new minicabs while a mediator spends two months trying to resolve the crisis.

Taxi unions said they were ending strike action, with Nordine Dahmane of the FO-Taxis union hailing the government's "brave and wise decision".

The minicabs, known in France as tourist vehicles with chauffeur (VTCs), were introduced in 2009 as an attempt to address the chronic shortfalls of taxis, particularly in Paris, the most visited city in the world.

Unlike regular taxis, they must be booked in advance and do not have the right to pick up passengers who hail them in the street.

Cab drivers have said the VTCs are unfair competition because taxi licenses are granted by the government in limited numbers and are sold amongst drivers for around €230,000 ($315,000).

The license to operate a VTC costs only €100.

The taxi unions are calling for VTCs to be limited by a 30-minute delay between orders and pick-ups and a minimum fare of €60 – which would effectively close them out of the market for trips within central Paris.